The Scottish Rite Masonic Museum & Library staff gets satisfaction from the rewards of research, the joy of discovering or rediscovering something that brings context to a document--and consequently to lives of others. In fact, in many cases, we gain a greater understanding of our own lives, as well as the lives of others, through our research. However, when we fail to establish the context or history of a document, that same process can be extremely frustrating. 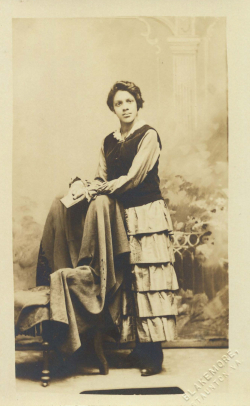 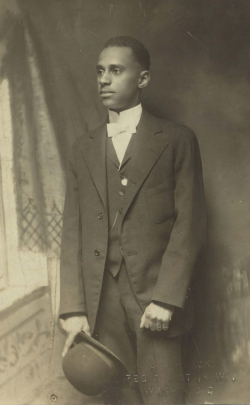 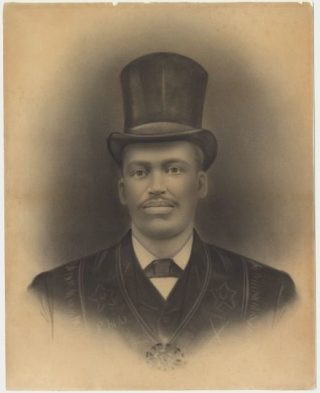 Of the many striking portraits to be displayed in the Scottish Rite Masonic Museum & Library’s upcoming exhibition, “What’s in a Portrait?,” the work pictured to the left is a staff favorite. Depicting a Past Noble Grand of the Grand United Order of Odd Fellows in his top hat and collar, the portrait possesses a simple grace—not only in its subject’s facial expression, but also in its delicate artistry.

But, you may be wondering, what is it—a photograph, or a drawing? It's a crayon enlargement, or a print enlarged from a photographic negative and then highlighted by hand with chalk, graphite, and pastel. Also referred to as a crayon or pastel portrait, the crayon enlargement was a popular medium between the 1850s and early 1900s. Born out of the carte-de-visite, it allowed people to have their favorite carte images of loved ones blown up for wall-sized display.

While there came to be a number of methods through which this type of image could be achieved, the process generally involved a camera with an angled mirror attachment which captured and directed sunlight first through the photo negative, and then through a special enlarging lens onto a piece of treated paper. These images, called solar enlargements, required several hours’ exposure time and repeated readjustments to keep the mirror aligned with the sun’s movement. (See the details of this process and its fascinating evolution in this article.) As illustrated by the example above, one of the process’s tell-tale signs was the fading circular outline around the image where the edges of the lens rendered the image blurry.

Photographers quickly discovered, however, that not only did this process magnify imperfections on the negative, but also that images that looked fine in their original, small size needed to have their contrast, depth, and detail enhanced to produce pleasing wall-sized images. These problems could be addressed with hand coloring, which was done with crayon, pastel, charcoal, gouache, and watercolor. Artists favored easily blendable materials and matt papers for the softer-looking end result they produced.

While some photographers did the coloring work themselves, many hired artists who specialized in photographic coloring. An artist with a practiced hand enhanced the portrait of the G.U.O.O.F. Past Noble Grand. Below is a different, and earlier, crayon enlargement from the Museum’s collection; in this portrait of a member of the Amoskeag Veterans' Association signed by New Hampshire photographer Henry P. Moore, stark white tones highlight the subject’s shirt and buttons, creating vivid contrasts. 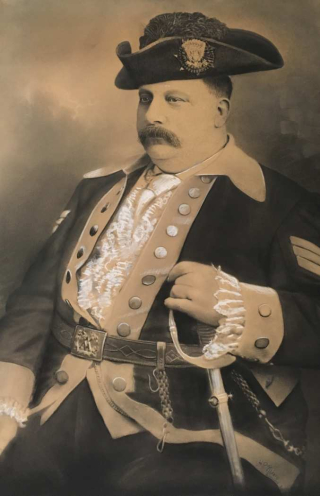 If you are curious to see more portraits from the Museum’s collection, you can view the online version of "What's in a Portrait?" here. We hope you’ll find time to enjoy it while the Museum & Library is closed due to the stay-at-home advisory in Massachusetts. Also, please join us on Facebook and check out our other online exhibitions and online collections. As always, we welcome your comments below. 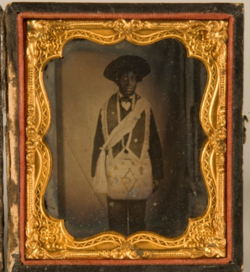 June 19th will be the 150th anniversary of Juneteenth day, also known as Emancipation Day, in the United States.  Juneteenth is the oldest nationally celebrated commemoration of the ending of slavery in the United States. President Abraham Lincoln (1809-1865) issued the Emancipation Proclamation in January 1863 declaring that slaves in all states still at war with the federal government were free and would remain so.The proclamation was not fully realized until June 19, 1865, when Union General Gordon Granger (1821-1876) announced freedom for all slaves in the Southwest including Texas, the last rebel state to allow slavery following the end of the Civil War. The day is believed to have been named “Juneteenth” by those freed in Texas in 1865.The 13th amendment outlawing slavery everywhere in the United States was subsequently ratified in December 1865.

Since that time, nationwide grassroots celebrations have commemorated this significant moment in American history. In June 2014, the U.S. Senate passed legislation formally recognizing June 19th as “Juneteenth Independence Day” and supporting the nationwide celebration of the holiday.  In light of this anniversary the Scottish Rite Masonic Museum & Library is taking a moment to highlight some of the items in our collection related to African American Freemasonry (commonly referred to as Prince Hall Freemasonry) and fraternalism. 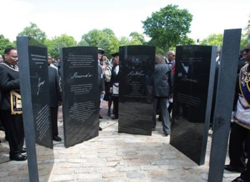 African American Freemasonry emerged in 1775 when Prince Hall (1738-1807), an active Methodist and leading citizen in Boston’s African American community, attempted to join Boston’s Masonic Lodges but was denied membership. In response, he and fourteen other African Americans who had been rejected by the established Boston lodges turned to a Masonic Lodge attached to a British regiment stationed in the city. Initiated in 1775, Hall and his Masonic brothers met as members of the British lodge until the Revolutionary War ended. In 1784 Prince Hall and the other members of the British lodge, petitioned the Grand Lodge of England to form a new lodge on American soil. The governing body granted his request, creating African Lodge No. 459.

When Prince Hall died in 1807, African American masons chose to give their fraternity his name to distinguish it from predominantly white “mainstream” lodges that generally excluded blacks throughout the 1800s and early 1900s. Today, there are reported to be over 4500 Prince Hall Lodges worldwide. After the civil war, Prince Hall Freemasonry and other fraternal groups, like the Grand United Order of Odd Fellows and Improved Benevolent and Protective Order of the Elks of the World spread throughout the North and South, helping to establish community institutions and benefits for freed families. Prince Hall and other African American Masonic leaders like Moses Dickson (1824-1901) and Lewis Hayden (1811-1889) were  influential activists in the abolitionist and civil rights movements of their era. Their leadership and influence emphasizes how Freemasonry and fraternalism impacted civil rights efforts and afforded African Americans the opportunity to organize toward an equal and free black citizenship in American society. 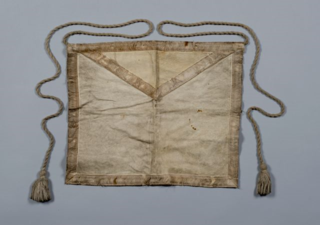 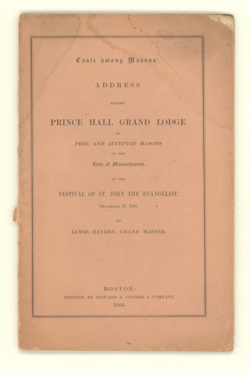 In December of 1865, Lewis Hayden, Grand Master of the Massachusetts Prince Hall Grand Lodge, delivered a stirring address to members of that Grand Lodge, calling into question the continued discrimination of African Americans in some Masonic lodges and American society.

Caption: Caste among Masons; address before Prince Hall Grand Lodge of Free and Accepted Masons of the State of Massachusetts, at the festival of St. John the Evangelist, December 27, 1865 By Lewis Hayden, Grand Master.(Boston, Massachusetts: Edward S. Coombs & Company, [1866]) 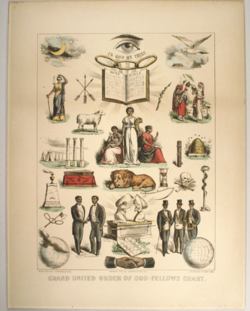 The Grand United Order of Odd Fellows was created in Europe and is a fraternal group that includes mutual benefits. Peter Ogden created the American counterpart of GUOOF in 1843 after obtaining a charter from the fraternal society of England. Membership exploded after the Civil War when African Americans were able to organize lodges in the south. The Grand United Order of Odd Fellows reported a membership of 108,000 in the late 1990s. 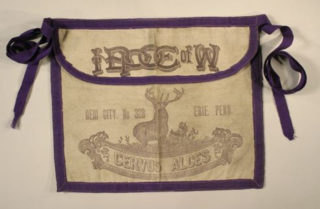