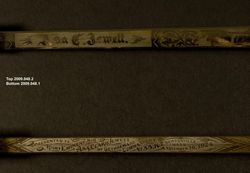 Recently, the National Heritage Museum received a gift of two Masonic Knights Templar swords.  The Museum is fortunate to have an excellent collection of Masonic and fraternal swords, so we can afford to be selective about adding to it.  We get a number of calls each year from people who find a Knights Templar sword in their attic or on ebay and are looking to learn more about it.  Coming from an organization that numbered almost 200,000 members in 1900 with uniforms that required a sword, Knights Templar swords have never been rare.

What made us take a closer look at these two swords was the inscription on one: “Presented to Right Eminent Sir Asa Clarke Jewett by Gethsemane Commandery No. 35, K.T. Newtonville November 10, 1924.”  Among our collection of over 150 swords, we have few that are documented as presentation pieces the way this one is.

Collections Department volunteer Nancy Bernard recently completed some research on the sword and its original owner.  She was able to add to the sword’s story by exploring newspaper articles, Masonic membership records and histories of Jewett’s Knights Templar Commandery.

Asa Clarke Jewett was born in Pepperell, Massachusetts, on March 20, 1860.  According to his obituary, he was in the decorating business with an office in Newton Center and “was one of the best known men in this line in Greater Boston.”  Jewett was raised a Master Mason in Dalhousie Lodge in 1881 and joined Gethsemane Commandery in 1884.  He was also a Scottish Rite Mason and a member of Boston’s Aleppo Temple, part of the Shrine.  In October 1924, Jewett was elected Grand Commander of the Knights Templar of Massachusetts and Rhode Island.  The sword, which was presented to him in November 1924 by his home commandery, seems to recognize this achievement.

Sadly, Jewett’s time in office was brief.  He died on July 23, 1925, while leading a party of Massachusetts and Rhode Island Knights Templar members to the organization’s 36th Triennial Conclave (or national meeting) in Seattle.  The group had stopped for the night in Glacier National Park, Montana, when Jewett passed away.

The sword is currently on view as part of a display of recent acquisitions to the Museum.