Happy Holidays from the Scottish Rite Masonic Museum and Library! 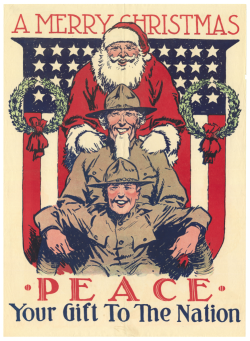 In 1918 artist Gordon Hope Grant (1875-1962) designed and drew this cheerful poster of a young doughboy, an older man--likely meant to represent Uncle Sam--and Santa Claus wishing all a Merry Christmas. The smiling, rosy-cheeked figures are companionably grouped together in front of a shield bearing the colors and symbols of the American flag. Two holiday wreaths adorn the shield. In addition to the wish of “A Merry Christmas” at the top, text at the bottom of the poster thanks soldiers for their help. This text calls out solders’ contribution to a significant accomplishment with the phrase: “Peace, Your Gift to the Nation.”

World War I formally concluded in November, 1918. Hundreds of thousands of American soldiers needed to come home from Europe to the United States or from locations within the United States. Many of these service members completed their duties in Europe and the United States and then waited for the Army to arrange transportation for their return home. Several organizations, such as the American Red Cross, sought to ease the waiting period by providing soldiers with laundry facilities, wholesome food and leisure activities, but it was still a challenge.  Repatriation of soldiers from Europe lasted well into the summer of 1919.

Gordon Grant, who created this poster, achieved the rank of Captain working for the Army’s Morale Branch, a group that produced propaganda to support the war effort. After fighting ended in 1918, he produced a series of posters that encouraged soldiers to complete their periods of service. Some of his posters lauded the value of an Honorable Discharge. Others sought to inspire soldiers to take pride in their service and encouraged them to be patient through the demobilization process. Examples of these posters are on view at the Museum in the exhibition, “Americans, Do Your Bit:  World War I in Posters.”  Grants' posters  are just some of the millions American artists produced in support of the war effort.  These images delight and intrigue viewers today and serve as a reminder of Americans’ shared effort and sacrifice during World War I.