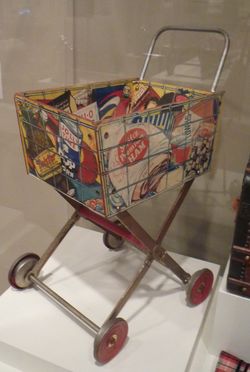 A long-time staff favorite, a toy shopping cart in our current exhibition Curators' Choice: Favorites from the Collection, is attracting visitors’ attention.

This charming toy is a child-sized cart (about 20” high) decorated inside and out with a colorful collage of the kinds of groceries that could have been found in a 1950s supermarket.  Made by the Gong Bell Manufacturing Company of East Hampton, Connecticut, the cart, like many of this maker’s products, incorporated a bell in its wheels.  As the cart rolled, bells in the wheels clattered and rang.  In fact, the original owner, who donated the object to the museum, recalled that this cart made an “incredible racket” when she and her brother played with it.  We tested the cart in the museum storage area and confirmed that it is very noisy indeed!

Founded in 1866, the business that became the Gong Bell Manufacturing Company started making toys a few years later.  A collector’s website shows many examples of the company’s products and notes that in 1921, a Gong Bell toy telephone proved to be one of the most popular toys on the market at the time.  Toys with bells in many shapes and sizes soon followed.  The museum’s cart, purchased in Connecticut around 1953, is just one example of the many kinds of push, pull and ride toys the company made.  In spite of this variety of offerings, less than ten years after this cart was made, Gong Bell went into bankruptcy. Collectors suggest that the emergence of plastic toys in the late 1950s made it hard for the Gong Bell Company, with its metal and wood products, to compete.

A 1954 catalogdescribed this Gong Bell toy shopping cart as “chuck-full of Famous Brands groceries.”  For $2.98 you could take one home with the accompanying “miniature empty boxes of well-known merchandise” to fill it up.  Some of the brands highlighted on this cart include Jolly Time Popcorn, Sun-maid Raisins, Swift ham, Jello-o and Dreft laundry detergent.  Playthings, such as this cart, helped children learn about everyday tasks that they would undertake as adults, such as cooking, laundry or shopping.  Toys that used real product names made play more realistic.  They also, rather insidiously, cultivated brand loyalty and consumer awareness in young children.

If you have a story about your Gong Bell company shopping cart or another toy you have seen on view at the museum, please tell us about it, we would love to know more!