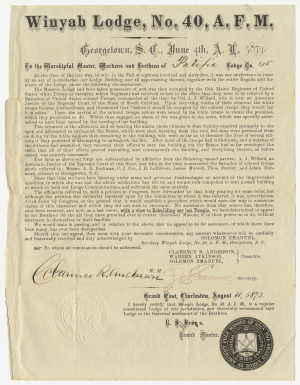 As Union forces overtook South Carolina during the Civil War and after, many of the state’s Masonic Lodges were forced to suspend operations because of their members’ military service to the Confederacy and/or the displacement of the state’s civilian population. Such was the case in the city of Charleston, where Union shells fired by batteries on Morris Island prompted Charleston’s Masons to relocate their lodge at least twice, and in the city of Columbia, where the city’s lodge buildings were destroyed over the course of the war. At a meeting called by the Grand Lodge of South Carolina to “devise ways to obtain assistance” for the lodges under its jurisdiction, the Grand Lodge acknowledged its helplessness to aid its subordinate lodges and formed a committee to “urge our brethren abroad” to assist the state’s distressed Masons and Masonic Lodges.

While the war had devastated much of the state, including Georgetown, South Carolina’s, rice-growing economy, the city’s Masonic Lodge, Winyah Lodge, No. 40, had flourished. The Lodge’s “fine large building” had remained untouched, and its brothers continued their work uninterrupted until the summer of 1865, when Union soldiers occupied the city. The following circular letter from the collection of the Scottish Rite Masonic Museum & Library documents the occupancy and destruction of Winyah Lodge’s building by Union soldiers of the 15th Maine Volunteer Infantry Regiment in the months just after Lee’s surrender at Appomattox. In it, the authors, two of which served in the Confederate military, petition their fellow Masons, both North and South, to aid Winyah Lodge in the rebuilding of their “lost Temple.” They describe in detail how the white soldiers of the 15th Maine torched their lodge building in response to being “relieved by a Battalion of United States colored Troops” under the command of Colonel A. J. Willard. The circular letter provides a fascinating insight into the difficulties faced by the Fraternity, as well as the country, in post-Civil War America, as well as touching upon issues such as race.

In the aftermath of the destruction of their lodge building and its contents by the 15th Maine, Winyah Lodge’s efforts to collect restitution from the Federal Government for its losses were blocked until the passage of the Tucker Act of 1887. This act waived the sovereign immunity of the United States in certain lawsuits, and allowed citizens to sue the Federal Government. Inexplicably, and for some unknown reason, the Lodge failed to take advantage of this new law until 1906, when the Trustees of Winyah Lodge, No. 40, filed their case. In the following year, the court, which noted this suspiciously long gap between the incident in question and the filing of the case, ruled that it could not determine from the evidence presented who started the fire.

Shorey, Henry A. (1890). The Story of the Maine Fifteenth. Bridgeton, Me.: Press of the Bridgton News. Accessed: 27 June 2018. https://archive.org/details/storyofmainefif00shor