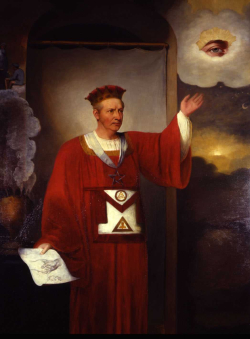 One of the ways we serve our Masonic audience at the National Heritage Museum is by caring for important documents and objects on loan from local lodges.  This painting was presented to Annawon Lodge 115 in West Haven, CT in 1874.  In late 2006, Annawon Lodge sold its building to the city and prepared to move to smaller quarters – too small to house this large painting.  Lodge members did not want to see it destroyed, but had no way to display or store it locally.  Working with the Lodge, the Museum oversaw the transport of the painting from West Haven, CT to Lexington, MA.  Prior to hanging the painting in our Farr Conference Room, Museum staff facilitated conservation treatment of the painting and the construction of a new frame.  Through cooperative effort, the painting is now on exhibit at the National Heritage Museum for our visitors to enjoy, and to preserve this piece of Masonic history for the future.

The painting depicts King Solomon officiating at the dedication of his Temple.  The Bible tells the story of King Solomon building his temple.  This same story inspired the ritual behind the first three Masonic degrees – Entered Apprentice, Fellow Craft and Master Mason.  On the left-hand side of the painting is an urn burning incense with two workmen above.  One is an overseer holding a square, the other is a craftsman who is sitting down, indicating that their work is complete.  Other common Masonic symbols are also visible: a partial square and compass at top center, signifying reason and faith; and an all-seeing eye at top right, representing watchfulness.

While the painting’s large size – it measures approximately 9 1/2 feet by 5 1/2 feet – makes quite a first impression, the story behind its origin is even more intriguing.  According to the painting’s history, Solomon’s face is modeled on the artist’s father.  The work also has a history of being started by one artist and finished by a second.

The painting is signed by George Whiting Flagg (1816-1897) of New Haven, Connecticut.  Flagg studied under his uncle, Washington Allston (1779-1843), and painted many historical scenes and genre pictures.  Early in his career, he was supported by his patron, Luman Reed of New York City, and was able to travel extensively in Europe.  No evidence has yet been found that Flagg was a Mason, but his father is listed as a member of New Haven Commandery No. 2.

The story passed down with the painting states that the first artist passed away, leaving the canvas incomplete.  A second artist associated with the painting is Harry Ives Thompson (1840-1906) from West Haven, Connecticut.  Thompson trained as an artist, studying under Benjamin H. Coe and exhibiting at the National Academy of Design in the 1870s and 1880s.  Thompson was a Mason and a member of Annawon Lodge in Connecticut.  So far, we are unable to conclusively prove that two artists worked on the painting.  The story of one artist dying and the second taking up the brush cannot be true as Flagg, the initial artist, passed away in 1897, twenty-five years after the painting was presented to Annawon Lodge.   Although this colorful history cannot be supported with the available information, the newly conserved painting is a vibrant addition to the Farr Conference Room.