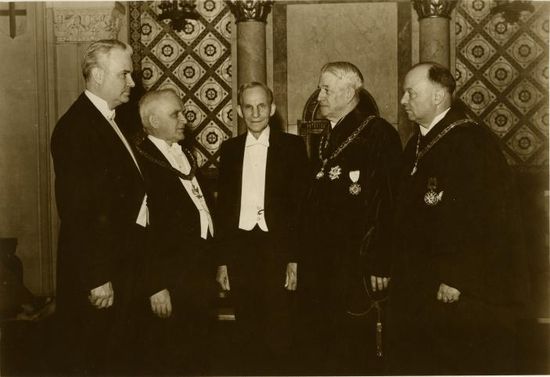 At the Annual Meeting of the Supreme Council for the Scottish Rite's Northern Masonic Jurisdiction, held in September 1940 in Cincinnati, Ohio, George E. Bushnell, Deputy for the state of Michigan,

At the time that the Northern Masonic Jurisdiction's Supreme Council conferred the Thirty-Third degree on him at age 77, Henry Ford (1863-1947) had been a Mason for 46 years, having been raised in Detroit's Palestine Lodge No. 357 in 1894 at age 31.

While Ford was unquestionably the most well-known person in the room that evening, two other men pictured in the photo above were not only well-known within Scottish Rite Freemasonry, but were, at the same time, luminaries in the legal field. At the time of the conferral, George E. Bushnell was Chief Justice of the Michigan Supreme Court and Melvin Johnson was Dean of the Boston University Law School. John Bricker, then Governor of Ohio, was also in the legal field, having served as Attorney General for Ohio from 1933-37 before becoming governor, and returning to law practice after his twelve years (1947-1952) as a U.S. Senator from Ohio.