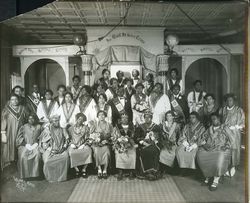 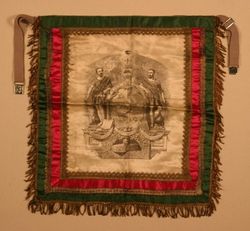 The Independent United Order of Mechanics 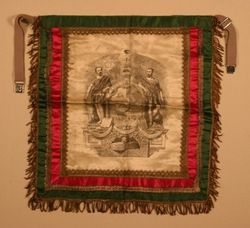 Here at the National Heritage Museum, we get pretty excited about lesser-known fraternal groups.  The apron seen here is a recent acquisition, which was originally used by a member of a little-known group - at least it wasn't listed in our standard reference books and it wasn't represented in our collection.

The apron was worn by Torrance Ashby (1897-1966), as a member of the Independent United Order of Mechanics, a group that is still active.  Ashby joined Star of Cambridge Lodge in Cambridge, Massachusetts, in 1920, when he was about 23 years old.  When he died in 1966, the apron, along with a collar and his membership certificate passed to his son, Deighton Ashby (1935-2006).  We are pleased to have all three items in our collection.

The Independent United Order of Mechanics formed in England in 1757 as a Friendly Society, a type of mutual benefit society that also served ceremonial and friendship purposes.  Reportedly, a schism between two local English Masonic lodges spurred organizers to found the group.  In the 1800s, the Order spread to the United States, Central America, the Caribbean, the Netherlands, and Canada.  The IUOM became established in the United States in its present form on January 3, 1910.  Membership is open to men and women, boys and girls, of "high moral and ethical standards, who believe in "A Supreme Being" who rules and governs the Universe."  Membership embraces all races, creeds and religions; indeed, the group has a tradition of a strong African American membership, which included the original owner of the apron, Torrance Ashby.

The group's motto is "Friendship, Truth and Love," suggesting some additional inspiration from the Odd Fellows.  Members aim to practice and promote justice, philanthropy, charity and benevolence.  They look after the welfare of their members and are active in their communities, particularly in healthcare and in education.

The apron is silk with a design printed on the front in black.  Bright pink and green silk, along with gold trimming are added as borders.  A close look at the apron suggests that Ashby's wife or another female relative made it at home.  One of the brown elasticized "ties" stitched at the corners has a clasp reading "Gem Golf Garter," suggesting that the maker repurposed the garter for the apron ties. 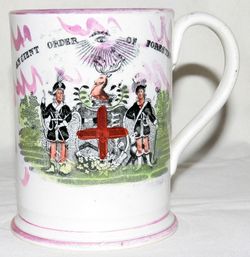 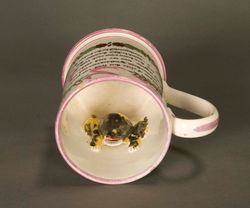