Fight, Save, Buy, Wake Up! Selections from the National Heritage Museum’s Poster Collection 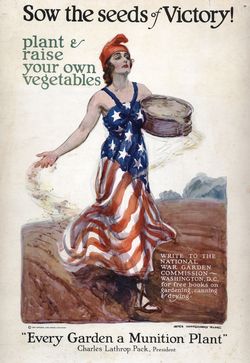 Starting November 5, 2011, we will be featuring a new exhibition of selections from the collection in our corridor space, “Fight, Save, Buy, Wake Up! World War I Posters."  Big, bold and intriguing, our World War I posters have long been favorites of mine.

Throughout America’s participation in World War I—from April 1917 through November 1918—these colorful and compelling posters exhorted Americans to fight, conserve food and buy bonds.  At the beginning of the war, volunteer artists formed the Division of Pictorial Publicity of the Committee on Public Information.  Some of the better-known participants whose posters are featured in this exhibition are: James Montgomery Flagg (see a recent post on one of his works in the exhibition), Howard Chandler Christy, Henry Raleigh and Fred Goss Cooper (see one of his posters in the exhibition illustrating this post and another in this historic photo from Connecticut).  Experienced, professional illustrators who drew pictures for books, magazines and advertisers, these artists and others turned their noted talents to selling the government’s message during the war. The Division created a host of advertisements, including 700 poster designs. Millions of their posters hung in public spaces and workplaces—citizens could not escape their pressing and persuasive messages.

Posters helped recruit soldiers.  They also drummed up dollars.  To help finance the war, the U. S. Treasury sold savings bonds, called Liberty Loans. An army of volunteers promoted these bonds door-to-door and at rallies.  Posters and other advertising for the bonds emphasized the importance of civilian participation in the fundraising effort.  Four Liberty Loans and one Victory Loan, organized after the fighting concluded, helped the government raise billions of needed dollars. 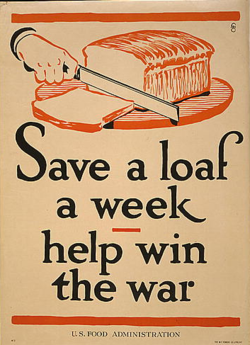 Along with money, Americans conserved and produced food to support the war.  According to Herbert Hoover, then head of the United States Food Administration, food was “second only to military action,” in winning the war.  Hoover crafted policies and organized the logistics that allowed America to feed citizens, soldiers and the Allies by controlling the supply, distribution and conservation of food.  To help achieve these aims, food agencies enlisted eye-catching posters urging Americans to conserve, preserve (see one Flagg's posters encouraging canning in action), and produce.

The twenty posters gathered in this exhibition offer a glimpse of a time when American citizens and artists, facing uncertain outcomes, responded to their government’s urgent requests to fight, save, buy and wake up!  I hope you will have a chance to visit the museum and see if these posters might attract your attention.