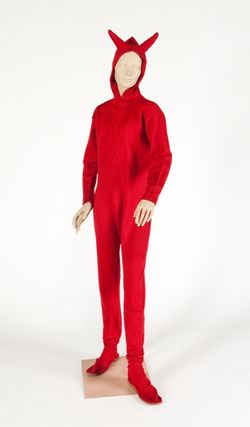 If you ever watched Happy Days on TV, you probably remember the funny hat that Mr. Cunningham would put on to go to his Leopard Lodge meetings. For decades, popular television programs and movies have poked fun at fraternal groups by having characters belong to made-up organizations with goofy names and wild hats and costumes. Members and non-members alike have often perceived Masonic costume as weird, funny or outlandish. And, garments like the red knitted devil costume seen here seem pretty strange. One of the most unusual costumes in the National Heritage Museum collection, the devil suit was used by Scottish Rite Masons in Rochester, New York, to perform the 19th Degree. The degree explores the perennial conflict between good and evil. The Spirit of Evil character required a “Satanic costume of red,” like this one.

But, when we look at prints, paintings and photographs from the 1700s and 1800s, we also think that some of the clothing in those images is pretty weird and funny too. And, when we compare the clothing to Masonic regalia, we can see that perhaps it was not as outlandish as it now seems to us. Often, regalia manufacturers took their cues from contemporary fashion houses.

The National Heritage Museum’s new exhibition, “Inspired by Fashion: American Masonic Regalia,” uses clothing and images from the Museum’s collection to trace the inspiration behind Masonic regalia and costume. Each section explores a different source – contemporary fashion, the military, Orientalism, and theater – in order to show the connections between everyday style and fraternal fashion.

Scottish Rite Freemasons, the same group that founded and continues to support the Museum, are known for their elaborate theatrical degree ceremonies, which became popular during the early 1900s. They may have been partially inspired by the craze for historical pageantry that began around 1900. People across the country had begun putting on elaborate plays about their town’s history. Like the Scottish Rite degree ceremonies, these productions offered a shared sense of values, built a collective story of the community, and helped to create an identity for participants and audience alike. 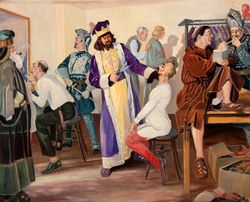 The painting shown to the right, Degree Night at the Robing Room, captures a backstage scene at a Scottish Rite degree ceremony. The artist, Frank A. Stockwell (1890-1970), was both a commercial artist and a Scottish Rite Mason with firsthand knowledge of the group’s rituals. After his death, his brothers remembered him for “his dramatic roles in many of the degrees.”

“Inspired by Fashion: American Masonic Regalia” is on view through March 10, 2012 at the National Heritage Museum, 33 Marrett Road, Lexington, Massachusetts. The Museum is open Wednesday through Saturday from 10 a.m. to 4:30 p.m. For more information, please visit our website.