"For All Time: Clocks and Watches from the National Heritage Museum"

Imagination and a love of making things shaped George A. McFadden’s (1904-1991) life. Visitors to the Scottish Rite Masonic Museum & Library know him for the colorful cuckoo clocks he made when he retired.  Three of his clocks are currently on view in Keeping Time:  Clockmakers and Collectors.  Design and automated figures interested McFadden for decades. As a teenager he created an automated display featuring a soda-drinking Eskimo to help sell Clicquot Club ginger ale at his family’s pharmacy in Bath, Maine. Soon after, he put his talent to the test as a student at the Museum of Fine Arts School in Boston. There he studied, among other things, stage and jewelry design.  For years, he and his wife Alyce Stewart Kent McFadden (1906-1978), a costume designer, worked together on productions for a number of Massachusetts theaters. He also designed mechanized displays for department stores and circus acts. 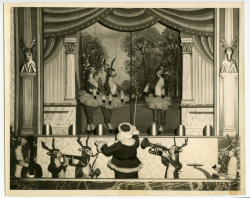 models of a Christmas-time display.  McFadden did not rate his skills as an artist highly, noting in 1981 that, “I never did amount to much of a draftsman.  Art is more a means to an end with me.” But his painting of a reindeer stage show conducted by Santa Claus (at left) is adeptly executed and charming.  In this work Santa, as band leader, directs a six-piece ensemble accompanying three dancing reindeer.  They perform for an audience that includes an older reindeer couple (one of whom is sleeping through the show) and an inattentive reindeer mother with a mischievous child.  The younger reindeer in the image is attempting to startle the drummer with what one hopes is a toy spider suspended from a string.

A photograph (at right) shows McFadden’s model of the painted scene.  Another photograph (below) depicts a model of the band with a pair of reindeer performers doing tricks with balls, rings and a drum-shaped prop. Unfortunately, these images are not labeled and did not come to the Museum with any information about why and when they were made.  McFadden did, over the course of his career design, automated Christmas displays for Jordan March and Filene’s department stores.

This painting and the related photographs suggest that the imaginative McFadden took a whimsical approach to celebrating the Christmas holiday.  If you have any ideas or information about McFadden’s models, please leave a comment below.  In the meantime, Happy Holidays to you from the Scottish Rite Masonic Museum & Library. 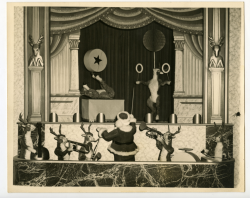 Last Chance to See "For All Time"

Open just through this Sunday, February 21st, the exhibition “For All Time:  Clocks and Watches from the National Heritage Museum” is filled with fascinating stories.

The career of Eugene Fitch (b. 1846) is one.  Originally a dry goods merchant, Eugene Fitch turned to invention in the 1880s.  After applying for patents for a display unit for thread and improvements to the typewriter, in the early 1900s, he sought patents for a clock. 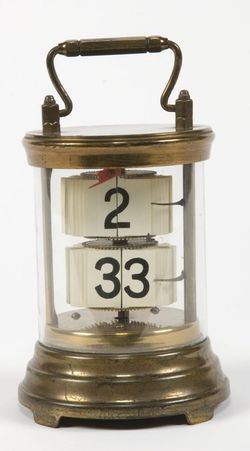 What was new about his clock?  Rather than showing the time with hands on a numbered dial, Fitch’s “time indicator” used small die-cut celluloid plates to display the hour and minute.   He named it “The Plato Clock,” after the white “plates” that showed the time.

The American clock-manufacturing powerhouse, The Ansonia Clock Company, produced the Plato Clock from at least 1904 to 1906.  Their catalog described it as “the latest in Novelty Clocks.”  Ansonia went on to claim that the little gold clock kept perfect time and sold “on sight.”  In addition to the American-produced models, French and German companies sold copies of Fitch’s design on the continent through 1914.

What happened to Eugene Fitch?  Currently, we don’t know but hope that future research will tell us more about the inventor of the Plato clock and his next big idea.

Posted at 09:00 AM in "For All Time: Clocks and Watches from the National Heritage Museum", Clocks , Decorative Arts, Eugene Fitch (b. 1846), Posts by Hilary Anderson Stelling | Permalink | Comments (0)