What were wheatless Wednesdays during World War I? 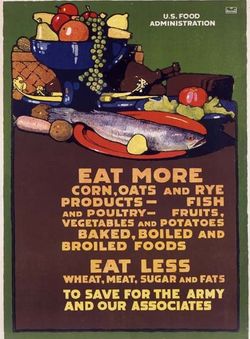 This poster is typical of food conservation posters produced during World War I, many of which especially emphasized saving wheat and meat. Herbert Hoover (1876-1964) Administrator of the U.S. Food Administration (USFA), promoted wheatless days and meatless days for the American people.

In April of 1917, the USFA began taking measures conceived to conserve food for the war effort. In particular, Americans were asked to "eat less wheat, meat, sugar, and fats" as shown in this World War I poster in the Museum's collection. These foods were to be saved for the United States Army and its allies. While there was no food rationing in the United States, as there was in Great Britain, Americans were still asked to change their food-buying and eating habits.

Americans were encouraged to eat more corn, oats, rye and fish. The USFA set up a nation-wide system that reached each state and county chairman to manage compliance at the local level. The system relied on the patriotic goodwill of the American people, but the USFA also set up some strict guidelines.

For example, restrictions on the use of wheat in baking were imposed by the government, which set the size of loaves of bread made by bakeries. And only bread baked with substitute ingredients as required by law could be called "victory bread."  As a result, corn, barley, rice, oat, rye, potato and other flours were widely used for making bread. Recipes for bread and other baked goods recommended no more than 50% white wheat flour. Most families observed what were called "Wheatless Wednesdays." In most states and counties, "Hoover cards and  pamphlets" were supplied to housewives for use in the kitchen. New menus were sent out that were geared toward using less wheat.

According to the USFA's Charles R. Van Hise, in his 1918 book,  Conservation and Regulation in the United States During the World War, wheat was very important to conserve.  In 1918, wheat was in short supply in Europe and Great Britain. Van Hise advocated voluntary conservation of wheat by American citizens. In his book, he also outlines procedures for price fixing of wheat crops in the United States to ensure that farmers were motivated to grow wheat. In 1918, a bushel of wheat was sold for a fixed price of $2.20 in Chicago.

Other restrictions included the conservation of meat. During the war, most Americans ate more fish and poultry rather than meat - meaning beef and pork. "Meatless Mondays" were a routine for most families. They also used vegetable oils instead of lard.

In the Museum's exhibition "Fight, Save, Buy, Wake Up!  World War I Posters" there are many posters with this same theme of food conservation.  This poster and others on view offer a window into life during World War I.