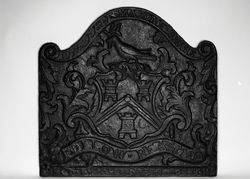 As autumn takes hold, keeping warm reemerges as a daily concern.  One of the most fashionable and intriguing heating-related objects in the collection of the Scottish Rite Masonic Museum and Library is this fireback, made for and sold by merchant and ship’s chandler Joseph Webb (1734-1787) sometime between 1756 and 1787.

In Webb’s day, people installed thick cast iron plates like this one into the back of their fireplaces.  They could be set into or rest against the rear of a fireplace.  Called chimney backs at the time, these plates served a dual purpose.  The iron protected bricks in the fireplace from heat and flame.  The substantial metal slabs also trapped heat that helped extend the warmth of the fire.

Webb’s fireback, with its bow-shaped top and exuberant folliate decoration, would have brought style into its setting.  Its iconography would have said something about the values and interests of its owner.  Webb belonged to the Lodge of St. Andrew's in Boston.  Perhaps seeking clients among his Masonic brethern, he had a large version of the arms of the Massachusetts Grand Lodge (derived from the arms of the Grand Lodge in London) cast into this fireback.  Along with the arms, the Massachusetts Grand Lodge's motto, "Follow Reason," ornaments this fireback. Webb held several offices at the Masschusetts Grand Lodge and served as the Grand Master from 1777-1783 and again from 1784-1787.  The symbols on this fireback certainly spoke to Webb's identity and likely resonated with Masonic consumers.  When a homeowner displayed this fireback in his domicile, he proclaimed himself not only fashion conscious, but also allied with Freemasonry.

Joseph Webb had a flair for advertising.  To promote his business, he had a message cast into the bottom edge of this fireback:  "Sold by Joseph Webb, Boston."  In 1765 he commissioned fellow entrepreneur and St. Andrew’s Lodge member, Paul Revere (1734-1818), to engrave a splendidly ornamented trade card (view a copy in the collection of the American Antiquarian Society).  The card listed and depicted many of Webb’s products and let shoppers know where to find him.  As noted on his trade card, Webb sold household necessities such as pots, kettles, spiders (a kind of skillet with legs), window sash weights and chimney backs.  He also provided more specialized iron goods to craftsmen like “Fry Kettles for Whaling” and “Hatters Basons & Irons.”

Researchers have suggested that the enterprising Revere may have cast firebacks for Webb.  He owned a furnace in Boston and paid craftsmen to carve the kinds of wooden patterns used in producing firebacks.  A 1793 receipt from Revere to David Greenough  shows that Revere did sell firebacks.  Greenough purchased three “Iron backs” as well as some “Window Weights” from Revere.  A receipt or other documentation would help clarify if Webb ordered this and other firebacks he sold at his shop from Revere.

Another of Webb’s firebacks decorated with arms and motto of the of Massachusetts Grand Lodge survives.  It forms part of the collection of the Museum of Fine Arts, Boston and came out of a Cape Cod home.  A similar example, with a history of having been taken from the cargo of a British trading vessel captured during the American Revolution and installed in the John Cabot House in Beverly, also survives.  Decorative and intriguing, these objects offer clues about both business connections and domestic life in the 1700s.