Now on View - Recent Acquisitions in the Library & Archives 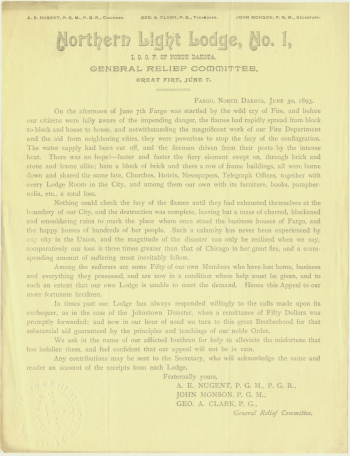 The exhibition currently on view in the Van Gorden-Williams Library & Archives reading room features some recent acquisitions. This circular is among the items.

On June 7, 1893, the worst fire in Fargo, North Dakota’s history, destroyed much of the town, including its city hall, the business district, and homes of most of Fargo’s 6,000 residents. This circular describes the destruction, which included “every Lodge Room in the City.” The General Relief Committee of Northern Light Lodge No. 1 sent out this appeal for donations to other Odd Fellows. It noted that fifty members of the lodge “lost home, business and everything they possessed.” If you are interested in learning more about the fire, the North Dakota State University Archives has a page about the fire, including photos that depict the devastation.

The Van Gorden-Williams Library & Archives is one of the premiere repositories in the United States for the study of Freemasonry and fraternalism and is recognized as one of six major Masonic libraries in the country. Its collections reflect the Museum’s scope of Freemasonry, fraternalism, and American history. The Library & Archives holds one of the world's most comprehensive collections on the subject of Freemasonry, as well as other fraternal organizations, such as the Independent Order of Odd Fellows and the Knights of Pythias, whose development paralleled or was influenced by Masonry.

The Library & Archives collections pre-date the founding of the Museum in 1975, with the Northern Masonic Jurisdiction’s Supreme Council library collections forming the nucleus of the Van Gorden-Williams Library. Since its inception, the Library & Archives has continued to add to its holdings—from unique manuscripts to the latest scholarship on fraternalism—through purchases and donations.

The Library & Archives encourages both serious and casual researchers to consult its collections and learn more about American history, especially the wide variety of fraternal groups that have been part of our national story, and which demonstrate the role that Masonic and fraternal organizations have played—and continue to play—in American life.

Do you have something you're interested in donating? Feel free to get in touch with us through the museum's website.