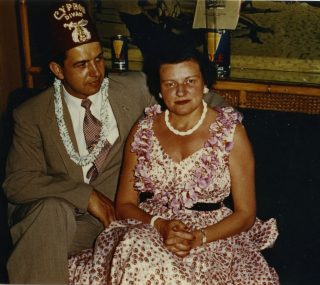 Sometimes the Scottish Rite Masonic Museum & Library receives donations that help to tell the story of an entire family’s history, complete with personal remembrances. Such is the case with the Schoenherr family of Schenectedy, New York, who had a long standing connection to Freemasonry. Since 2007, Florence E. Connor, daughter of Armin W. Schoenherr (1909-1949), has donated items related to these Masonic family connections. Armin L. Schoenherr (1880-1926), born in Germany, immigrated to New York at a young age and joined Corlaer Lodge No. 932 in Schenectady in the 1920s. His wife Emmy L. Canzan Schoenherr (1875-1954) was a member of the Order of the Eastern Star George Hope Chapter No. 271 and involved in the Order of Amaranth. They passed on their Masonic interests  to their three children, Armin W. (1909-1949), Ralph H. (1912-2002), and Florence Schoenherr Grubey (c. 1918-2004). 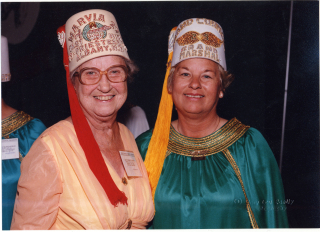 Armin W., a Mason and Shriner, owned a local jewelry store that sold and repaired not only traditional jewels but fraternal pins and other material designed to appeal to Masonic consumers. His younger brother Ralph (pictured above with his wife Elizabeth) was a Mason for over fifty years and involved with the Royal Arch, Knights Templar, Shriners, and Jesters. He served as Potentate of Albany's Cyprus Shrine in 1959 and ran the Shrine circus for several years. Their sister Florence was a member of the Ladies Oriental Shrine of North America and is pictured at right with a fellow member in Louisville, Kentucky, in 1994.

Aside from donating a number of objects related to her father and brother's jewelry store, Florence most recently donated charm bracelets, one is pictured below, that belonged to Elizabeth Schoenherr, Ralph's wife, a member of the Order of the Eastern Star.

Florence shared some information about the family’s history and related this memory of her father, who passed away suddenly at the age of 43 in 1949, the same year he became a Shriner. She remembered the day he joined the Shrine as “one of his proudest days,” adding, “I remember the Shriners at the wake putting an apron in his coffin and having a service. It meant a lot to my mother (41 with 3 children, 8, 10 and 12). My mother continued the business...My brother (Armin, Jr.) later took over the store.” Armin Walter Schoenherr, Jr. (c.1941-1987) was also a member of Corlaer Lodge No. 92 in Schenectady.

Do you have a Masonic family tradition to share? We want to know about it! Leave a comment below or email Ymelda Rivera Laxton, Assistant Curator, at ylaxton[@]srmml.org. 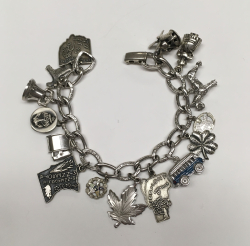 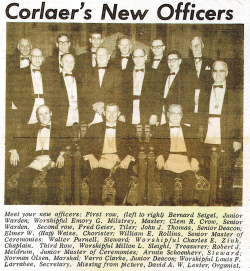