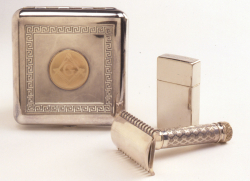 In 1904, American innovator and Freemason King Camp Gillette (1855-1932), first a member of Adelphi Lodge in Quincy, Massachusetts, who later belonged to Columbian Lodge in Boston, began manufacturing a safety razor with disposable blades. While some form of a safety razor had been in use for decades, Gillette patented the first disposable blades with a double-edged safety razor. This innovation made shaving easier—men no longer needed to sharpen their blades. In the late 1800s and early 1900s tastes and styles in men's facial hair changed. A growing number of men preferred to be clean-shaven and Gillette's new razor dovetailed with this trend.

In this same period, membership in fraternal societies was at an all-time high. Manufacturers, including the Gillette Company, made products decorated with Masonic and fraternal symbols, appealing to the high number of Masonic and fraternal consumers in the United States. This shaving kit, with a two-piece double-edged razor and a box for disposable blades, features a Masonic emblem at the center—a square and compasses with the letter G.

Other shaving related products gained in popularity with this clean shaven trend, including shaving mugs, soaps, and brushes. Ernest Price 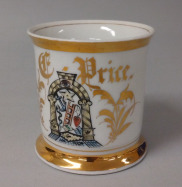 (1892-1966), a carpenter from Watertown, Massachusetts, had this standard shaving mug personalized with his name and Masonic symbols. Price, a member of Sydney No. 84 in Nova Scotia, emigrated to Massachusetts in 1920. in 1945 he affiliated with Pequossette Lodge, in Arlington, Massachusetts. The Museum has several examples of personalized fraternal shaving mugs in the collection. These mugs illustrate the connection between consumer goods and fraternalism in the early 1900s.