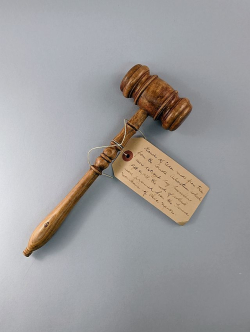 High in the Taurus Mountains of Turkey, there is a grove of Cedars of Lebanon (Cedrus libani). In the Grand Lodge of Massachusetts collection cared for at the Scottish Rite Masonic Museum & Library, there is a gavel made from the wood of one of these trees. The story of this gavel – from seeds to storage – brings together natural science and Masonic ingenuity.

In the early 1900s, Charles Sargent (1841-1927), the first Director of Harvard’s Arnold Arboretum, wanted to add examples of Cedrus libani to the collection of trees and shrubs at the site. However, these trees – which are mentioned in the Bible – grew primarily in the warmer climate of Lebanon and did not seem suited for New England weather. With the help of German naturalist Walter Siehe (1859-1928), Sargent was able to locate a forest of Cedars of Lebanon in the Taurus Mountains in Turkey. These trees grew further north and at higher altitudes and the two men thought they might also grow in Massachusetts.

In early 1902, Siehe shipped a number of cedar cones to Sargent and the trees were propagated in the greenhouses at the Arboretum. They started well and were planted on the grounds. By 1930, the Turkish Cedars of Lebanon were growing well and producing their own seed cones. The experiment was a success.

Then came the Hurricane of 1938, one of the most severe storms in New England history. The storm devastated the forests of the Northeast, destroying an estimated two billion trees in New York and New England. In the Arboretum, at least five of the Turkish cedars fell victim to the storm. (Happily, in 2022, eight of the original trees still survive on site.) As for the hurricane-damaged ones, a group of local Masons “grasped the opportunity to perpetuate these trees Masonically,” as one of them later said.

William Judd (1888-1946) was a member of Eliot Lodge in Dorchester and a gardener at Arnold Arboretum. During the clean-up after the hurricane, he and Welby McCollum (1887-1952) of West Roxbury Lodge decided to use some of the cedar wood to make a gavel. Given that McCollum worked as a builder, he may have crafted the piece.

After the gavel was completed, it was given to West Roxbury Lodge’s Past Master, Alexander McKechnie (1887-1965). He wrote out the story of the gavel on two typewritten pages – kept with the item – as a draft of his planned speech for a January 1940 presentation to West Roxbury Lodge. McKechnie mentioned in a handwritten addendum that he intended to present the gavel to the lodge and thence to the Grand Lodge of Massachusetts if desired. His note is addressed to Joseph Earl Perry (1884-1983), then-Grand Master of the Grand Lodge, and ends, “If you decide to put this gavel in the Museum you can pick out the important points in the above for a small card.” This small piece of material culture made of wood more than one-hundred-twenty years old still has a big story to tell. 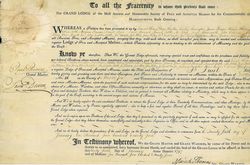 Recently, St. Paul Lodge A. F. & A. M., of Gardner (previously Groton), Massachusetts, deposited their lodge's charter on extended loan with the Scottish Rite Masonic Museum and Library for safe keeping (see detail of charter on the left). The museum has an extended loan program in which lodges, chapters, and other Masonic bodies from the Northern Masonic Jurisdiction can place their charters with us.  These charters are stored in a secure vault which is temperature and humidity controlled.  Charters are then documented in our database for tracking purposes.  There is no fee for this storage which is a service to the Masonic community.

The 216 year-old St. Paul Lodge charter is in very good condition.  Having been conserved at Northeast Document Conservation Center (NEDCC) in 2010, this document has been de-acidified, flattened, and encapsulated.  This stabilization insures that it will be preserved for many years to come.

We welcome other lodges and chapters to deposit their charters here at the museum on extended loan.  We will store, track, and record each document in our database.  If you are interested in this program or have questions about it, please contact either Catherine Swanson, Archivist, or Maureen Harper,  Collections Manager.