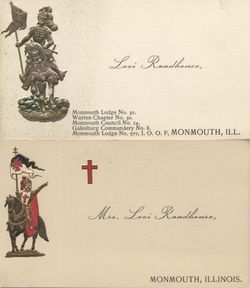 Calling cards evolved in England and were an essential part of introductions, invitations, and visits. During the 1800s, Americans followed this Victorian tradition of using calling cards. They used them in calling upon their friends and relatives. This was proper etiquette for men and women of middle and upper classes and a method for screening those who were socially undesirable.

Every gentleman and woman kept a ready supply of calling cards with them to distribute upon visits. Men and women's calling cards were generally simple in design. They gave the caller's name and often included the name of his gentleman's club, or fraternal organization. Masonic calling cards are a wonderful example of this and, like the ones seen here, demonstrate how some fraternal calling cards used more elaborate designs by incorporating emblems and symbols of Masonic organizations that the bearer was affiliated with.

Mr. and Mrs. Levi Roadhouse, of Monmouth, Illinois, carried cards (above) to a Knights Templar event. Levi Roadhouse was a member of the Independent Order of Odd Fellows as well as various Masonic organizations. These affiliations are all printed on his calling card.  Mrs. Roadhouse's card also bears the Knights Templar emblems so that everyone would know that she was associated with this fraternal group. 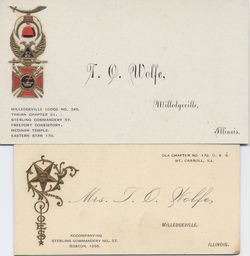 Mr. and Mrs. Truman Osborn Wolfe (m.1880) carried cards from Milledgeville, Illinois all the way to Boston, Massachusetts for the 1895 Knights Templar Triennial Conclave (see images at right).  They would have exchanged the cards at various Knights Templar events and while calling on acquaintances at their homes. Mrs. Wolfe was a member of Order of the Eastern Star as well as "accompanying Sterling Commandery, No. 57" to Boston in 1895. Her card bears the Eastern Star symbol of the five pointed star in gold. The five points symbolize characters from the Bible. Mr. Wolfe's card bears the emblems of his Commandery, Consistory, and Temple so that new acquaintances would know that he belonged to York Rite and Scottish Rite Freemasonry as well as the Shrine.

At some Masonic events, entire families carried calling cards. This was the case with at least one family who traveled to the 1895 Knights Templar Triennial Conclave. The Holmes family travelled from Galesburg, Illinois to Boston. The father, Hugh W. Holmes (1859-1936) was an officer of the Galesburg Commandery, No. 8, holding the position of Senior Warden. His wife, Jennie Ann (1864-1965), carried a card letting people know she was "accompanying the Galesburg Commandery." Two of Hugh W. Holmes' nine children accompanied him, Bertha Mae Holmes (b. 1883) and Urcel Lulu Holmes (b. 1892). Both daughters had their own calling cards indicating they were "with the Galesburg Commandery" (below left).

In a certain way, the calling card served to brand one's social identity. In the late 1800s, affiliation with a Masonic lodge, or a Knights Templar Commandery was socially important. And for wives and other family members, a Masonic association was definitely a desirable one.