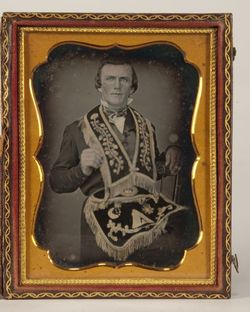 At the Scottish Rite Masonic Museum & Library, we aspire to collect and interpret objects associated with all of the fraternal groups that have ever met in the United States – Masonic and non-Masonic alike.  Millions of Americans have joined one or more groups since the 1700s and many men and women belonged to more than one.  During the late 1800s and early 1900s one of the most popular fraternal groups in America was the Independent Order of Odd Fellows.  Originally founded in England in 1745, the American branch was organized in Baltimore in 1819.  By 1907, the group numbered almost one million members in this country (see this previous post for more information).

Recently, we acquired the daguerreotype at left, showing an unidentified member of the Odd Fellows.  In the photograph, he proudly wears his collar and apron.  While we unfortunately do not know who this man is or who took the photo, his apron is detailed enough, with a tent, sun, moon and wreath, to tell us that he received the Odd Fellows Encampment degrees.  The Encampment degrees originated in 1827 and were conferred on members after they received the initial three degrees.  The Encampment degrees are called Patriarchal, Golden Rule and Royal Purple. 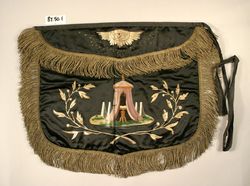 In addition to the daguerreotype, we are fortunate to have an example of an Encampment apron in our collection, seen here at right.  The dark silk apron has gold bullion fringe and painted emblems of a tent and wreath with an all-seeing eye on the flap.  While the daguerreotype dates to the 1840s or 1850s, this apron was probably made a bit later – in the 1870s or 1880s.