'Light on Masonry', the old and the new 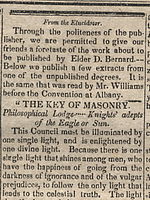 The advertisement at left first appeared in the Anti-Masonic Champion on May 7, 1829.  It was one of many attempts to publicize a newly published exposé on Freemasonry, and it appeared in one of the dozens of new newspapers that sprung up (mostly in the Northeast, N. Y., Pennsylvania and Ohio) during the Anti-Masonic reaction to the Morgan Affair.   'Elder D. Bernard' was David Bernard, a Baptist minister and Freemason from Utica, N.Y. and the publication was Light on Masonry: a Collection of all the Most Important Documents on the Subject of Speculative Free Masonry, Embracing the Reports of the Western Committees in Relation to the Abduction of William Morgan, Proceedings of Conventions, Orations, Essays, etc. etc.  Bernard included the craft rituals William Morgan exposed along with several higher degrees.  It was not the first exposé issued at the time, but arguably the most successful.  Light on Masonry, at over 500 pages, went through five editions alone in 1829!

Grand Archivist and Grand Historian of the Southern Jurisdiction of the Scottish Rite, Arturo De Hoyos, has just published a new look at Light on Masonry: the History and Rituals of America's Most Important Masonic Exposé (19 .D5 2008).  The recently published work provides a facsimile of the 5th edition of Bernard's 1829 work along with an extremely interesting and informative introduction.  Of particular interest is correspondence between J.J.J. Gourgas (then Grand Secretary General of the Supreme Council and later third Sovereign Grand Commander) and Giles F. Yates (Sublime Grand Master of Delta Lodge of Perfection in Schenectady, N.Y. and later Sovereign Grand Commander of the Supreme Council, NMJ) after Light on Masonry appeared.

The new Light on Masonry also provides details about each of the printings and editions, so armed with it and Kent Walgren's Freemasonry, Anti-Masonry and Illuminism in the United States, 1734-1850, I decided to take stock of our holdings of the early editions.  While our catalog listed eight first editions, one 2nd edition, and six 3rd editions, I discovered we actually own four of the initial stage of the 1st edition, two of the 2nd stage and seven of the 3rd stage, along with two 2nd editions and three of the 3rd edition.  Fortunately for us De Hoyos decided to use a 5th edition to replicate as we don't own any of that rare imprint.

markings, you're bound to find something interesting.  Not surprisingly for our library, several of the first edition copies were from the libraries of William L. Cummings, Alphonse Cerza, and William G. Peacher since our collection is comprised of significant holdings from each.  Two owners had interesting notes in their copies:  in one of the stage one copies is handwritten 'The Property of Saml. D. Spink, To be kept in the family' (as shown at right); one of the stage three copies has 'A. Parker, Go ye into all parts of the world and tell what Freemasonry has done.' 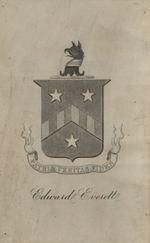 The most well-known previous owner of one of our copies, however, is Edward Everett (1794-1865), well-established as an Anti-Mason, and whose bookplate appears at left.  Everett's resume is about as stellar as any you'd find in 19th-century America:  educated and later taught at Harvard, represented Massachusetts in the U.S. House of Representatives and Senate, Governor of Massachusetts, Minister to Great Britain, President of Harvard, Secretary of State under Millard Fillmore, and always known as a great orator.  To many though, Everett is best remembered as the person who spoke for two hours at the dedication of the national cemetery in Gettysburg on Nov. 19, 1863 -- the one who spoke before Abraham Lincoln.  To Everett's credit, it's often reported, he told President Lincoln, "I should be glad if I could flatter myself that I came as near to the central idea of the occasion in two hours as you did in two minutes."

Sources mentioned above include:

Bernard, David.  Light on Masonry: A Collection of all the Most Important Documents on the Subject of Speculative Free Masonry, Embracing the Reports of the Western Committees in Relation to the Abduction of William Morgan, Proceedings of Conventions, Orations, Essays, &c. &c.  Utica:  William Williams, 1829.  Call number:  RARE 19 .B518 1829 [Online edition]

Library copy of Light on Masonry with Edward Everett bookplate was a gift of Augustus P.Loring, 85-211SC

Dust jacket image of Light on Masonry used above with permission of the author.