If you have ever eaten at a diner--and who hasn’t?--the upcoming Lowell Lecture is for you! We are excited to welcome guest speaker Richard J. S. Gutman, director and curator of the Culinary Arts Museum at Johnson & Wales University in Providence, RI. 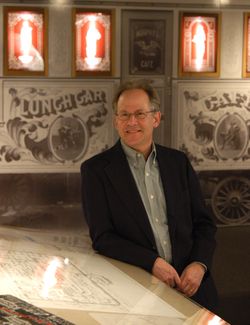 He will join us on Saturday, November 20 at 2 p.m. for an illustrated presentation entitled “What Is It about Diners? More Than a Meal, That's for Sure!” Mr. Gutman, about whom Yankee magazine said, “Nobody knows more about these classic eateries,” will elaborate on the staying power of the American diner, based on 40 years of eating and research. He has consulted on more than 80 diner restoration projects across the United States and in Europe. The leading authority on the history and architecture of diners, he has published several books on the topic, including American Diner Then and Now (2000) and The Worcester Lunch Car Company (2004). Long-time visitors to the National Heritage Museum may fondly recall two exhibitions he guest-curated with Kellie  Gutman: “American Diner: Then and Now” (1995)  and “Summer Camp” (1998).

This free public lecture is funded by the Lowell Institute. It is held in conjunction with the new exhibition, “Night Road: Photographs of Diners by John D. Woolf."