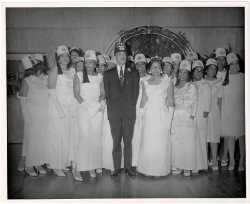 In this photograph, new to the collection in 2022, a group of women wearing white dresses and either white fezzes or a crown poses for a photo with a man in a suit wearing a darker fez. This image features members of a women’s auxiliary group of Prince Hall Shriners, the Ancient Egyptian Arabic Order Nobles Mystic Shrine of North and South America and Its Jurisdictions, Inc. in Philadelphia in the 1960s. Historically Black fraternal groups in the United States have a fascinating history and objects like this photograph help us better understand it.

Based on organization proceedings and area newspapers, this photo appears to show members of Pyramid Court No. 17, Imperial Court Auxiliary, A.E.A.O.N.M.S., Philadelphia along with one member of Pyramid Temple No. 1, A.E.A.O.N.M.S., also of Philadelphia. The A.E.A.O.N.M.S. was founded in 1893 in Chicago as a charitable, benevolent, fraternal, and social organization, dedicated to the welfare and extension of Prince Hall Freemasonry. Its women’s auxiliary was founded in 1910 in Detroit. The latter group was established at the behest of a committee headed by Hannah Brown, Esther Wilson, and Lucy Blackburn, wives of Prince Hall Shriners from Maryland, Rhode Island, and Washington, D.C. These women and others had already created eight “courts” (similar to Shrine Temples or Masonic lodges) for female relatives of A.E.A.O.N.M.S. members. In 1909, they requested an official “Grand Court” to oversee the activities of the local groups.

This international organization, then known as the Imperial Grand Court of the Daughters of Isis, is now called the Imperial Court. The organization boasts more than nine thousand members that meet in more than two hundred courts throughout the United States, as well as Canada, Bahamas, U.S. Virgin Islands, Korea and Western Europe. Members are known as Daughters.

Their regalia includes ceremonial collars worn with white dresses, shoes, and gloves, along with white fezzes or crowns. Decorated with embroidery and/or rhinestones, these fezzes bear the name of the owner’s court and a profile of the Egyptian goddess Isis. When a Daughter serves as Imperial Commandress, the presiding officer of a court, she wears a crown in place of a fez. In this photograph, since a woman in the center of the group wears a crown, she was likely the Imperial Commandress of Pyramid Court No. 17 when the photo was taken.

In their analysis of African American fraternal groups over a period of around one hundred fifty years, social scientists Theda Skocpol and Jennifer Lynn Oser found that “black women played an unusually strong role in African American fraternal federations.” The Imperial Court is an excellent example of Black women leading fraternal groups. It exists because women who were already organizing local courts applied for official recognition from A.E.A.O.N.M.S. The auxiliary’s schedule of meetings, fundraising events, and annual sessions is very similar to that of the brother organization.

In the past and today, the women’s and men’s groups under the umbrella of the A.E.A.O.N.M.S. gather together at an annual joint session. Daughters of the Imperial Court Auxiliary and Nobles of A.E.A.O.N.M.S. work together at all levels to accomplish the charitable, social, and Masonic goals of Prince Hall Shriners.

If you know of or have any materials related to the A.E.A.O.N.M.S. or its women’s auxiliary, please let us know by writing in the comments section below.