Beginning the Next 200 Years 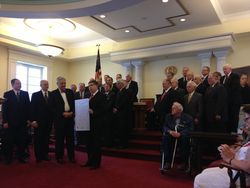 If you read our post yesterday, you know that August 5th, 2013, marked the 200th anniversary of the Scottish Rite Northern Masonic Jurisdiction,  To commemorate that event and to begin the next 200 years, the Supreme Council celebrated in New York City at the Grand Lodge of New York.  Sovereign Grand Commander John William McNaughton welcomed his counterpart from the Southern Jurisdiction, Sovereign Grand Commander Ronald Seale, as well as the Grand Master of the Grand Lodge of New York (see the photo below), and many of the Northern Masonic Jurisdiction's Actives and Deputies to New York City.  During a short ceremony, 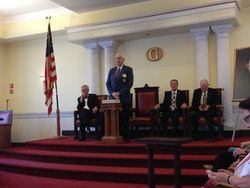 Commander Seale presented Commander McNaughton with a reproduction of the 1813 charter (seen in the photo above).  The Scottish Rite Masonic Museum & Library looks forward to continuing to collect material related to the past, present and future of the fraternity.

Elizabeth Cole Sheehan, Creator of the Prayer-Rag-Flag Honoring the American Soldier, at the Museum on Veterans Day, November 11

Elizabeth Cole Sheehan, creator of the Prayer-Rag-Flag honoring the American soldier, will be at the Museum on Veterans Day, Wednesday, November 11, from 1-4 pm. She will discuss her inspiration for the project, its construction, and answer visitor questions. Through the Prayer-Rag-Flag, Sheehan seeks express hope for peace in Iraq and Afghanistan, and to honor the fallen. She was inspired by Japanese prayer rags and Tibetan prayer flags. Both of these traditions involve tying fabric outdoors, allowing the prayers they hold to go out into the world on the wind.

In honor of Veterans Day, and to commemorate the 5,189 soldiers whose names appear on the flag today, Museum is displaying the Prayer-Rag-Flag in its lobby throughout the month of November. The Question We Cannot Answer - How Much Is This Worth?

National Heritage Museum staff answer hundreds of questions each year – and we love doing it.  Except for one question – the question we cannot answer.  It is one of the top questions we are asked – “How much is this [book / Masonic apron / certificate, etc.] worth?”

We’re a Museum, Library and Archives, right?  We have thousands of antique objects, books and documents.  We follow the market and even purchase examples from time to time, so we should know, right?  Just like the experts on the Antiques Roadshow, our curator, librarian and archivist should be able to assess antiques and suggest a value.

Believe us, it’s hard not to be able to answer a question for an interested inquirer.  But if we answer that particular question, we are being unethical.  For one thing, while we are trained museum and library professionals, with many years of experience, we are not trained appraisers.  Appraising antiques takes curatorial knowledge, but also a sense of the market on a much wider scale than we have time to cultivate.  We simply do not have the knowledge to confidently suggest the value of an antique object in terms of what it might bring on the open market or in the event of an insurance settlement.  While we do follow the antiques market, we spend the bulk of our time researching the history of objects we already own and interpreting their use and function for our visitors, rather than how much they might be worth to a collector 200 years after they were made.

But the real danger in this situation is a conflict of interest.  Say you come into the Museum with a wonderful silver ladle that was used by a Boston Masonic lodge during the 1790s.  You are considering donating it to the Museum because you know it’s interesting and has some history, but you don’t think it’s worth much from a monetary viewpoint.  You ask us what we think.  As we’re looking at it together, the museum curator notices that it has the mark of Paul Revere’s shop on the bottom; obviously something that would add significantly to its financial value.  But the curator worries that if she mentions this, you will no longer want to donate it.  Instead, you’ll want to sell it to us, or put it up for auction.  So she doesn’t let on and tells you it’s only worth $500 and you make the gift.  Flash forward a year when the Museum puts it on exhibit with a label about Paul Revere’s silversmith shop.  How do you feel?  This kind of conflict of interest is why we can’t answer the value question.  The American Association of Museums is quite clear on this point.  Even more importantly, so is the IRS, which requires third-party appraisals when a donor wants to write off a gift like the one described here.

So when you ask this question, not just of National Heritage Museum staff, but staff at any Museum or Library, understand that we’ll politely explain that it’s a conflict of interest.  We may give you an alphabetical list of appraisers in the area, being careful to let you know that we do not recommend one over the others, nor do we imply any kind of recommendation of any of the names on the list – which can also be a conflict of interest.  There are several national professional associations for appraisers; all maintain lists of their members and, unlike museum staff, are not prohibited from helping you to find an appraiser in your area.  So, if you find an antique of your own and are wondering about its value, try contacting one of the following:
American Society of Appraisers, 800-272-8258
Appraisers Association of America, 212-889-5404
International Society of Appraisers, 312.224.2567
National Institute of Appraisers, 800-676-2148