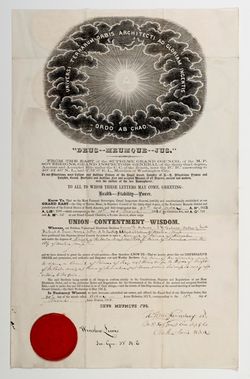 This charter, one of many in the collection of the Scottish Rite Masonic Museum & Library, created the Boston Council, Princes of Jerusalem, on March 11, 1863. While the Boston Council was successful, it existed for less than a decade. Why is that?

In 1871, just eight years after they were founded, the Boston Council united with the Giles F. Yates Council, also of Boston. Members of the Boston Council were received as full members and the charter seen here was surrendered. The years immediately following the "Union of 1867" - which united two previously competing Supreme Councils in the Northeast, and forming the present-day Supreme Council, Northern Masonic Jurisdiction - saw the consolidation of a number of subordinate bodies as the harmony that came with the union also brought with it the existence of multiple subordinate bodies in close proximity. This was especially true in cities such as Boston, where both previously competing Scottish Rite organizations flourished.

Among the founding members listed on the charter is Nathaniel B. Shurtleff (1810-1874), who served as Mayor of Boston from 1868-1870, and who was an early trustee of Boston Public Library. 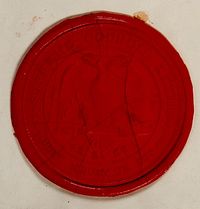 The charter contains a vibrant, red wax seal (at right - click on the image for greater detail), which reads Supreme Council XXXIII - Deus Meumque Jus [a Latin phrase which is the motto of the Scottish Rite's 33rd degree and which translates to "God and My Right"]. In the center is the familiar image of the double-headed eagle, below which is the latitude coordinate 42° 21' 22", which refers to the Van Rensselaer-led Supreme Council's "Grand East" being in Boston, Massachusetts.