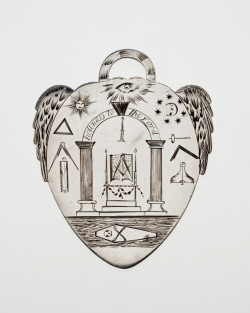 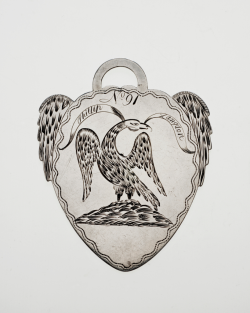 As regular blog readers know, here at the Scottish Rite Masonic Museum & Library we are fascinated by engraved medals created for Freemasons in the early 1800s. Some of these are mark medals that feature representative emblems chosen by their owners as part of the mark degree.  Others are medals that indicate affiliation with a particular lodge, sometimes called craft medals.

Recently the Museum purchased a craft medal produced for a Mason named Phillip Langdon (pictured, near left).  He is thought to have been associated with Columbia Lodge No. 91 in Philadelphia, Pennsylvania.  This medal closely resembles a medal purchased by the Museum thirty five years ago (pictured below, at right).  That medal is also engraved with the name of its owner, Benjamin Cannon. Neither man’s name appears on the list of members published in a history of Columbia Lodge, nor are they noted in the Grand Lodge of Pennsylvania's membership records, but their medals share iconography with a certificate printed for Columbia Lodge No. 91 in the early 1800s.

Both of these medals are teardrop (or plumb) shaped with feathered wings engraved on the widest part of the outside edges.  The maker incorporated a hanger in the shape of a half circle into the top of the medal.  Just under it, the engraver incised “No. 91.”  The medal owners’ names were written on a flowing banner clasped in an eagle’s beak on one side of the medal.  A history of Columbia Lodge No. 91 discusses how, in 1803, members decided to “procure a draft or design for a certificate plate” two years after their founding.  The engraver did not sign the plate.  Because engraver David Edwin (1776-1841) later became a member of the lodge, scholars have suggested he designed this plate.  The certificate made from it, like the medal, features an eagle with a sinuous banner bearing the lodge's name in its beak. Members also used a version of this eagle on an engraved apron pictured in the lodge history.

The other side of both medals features the same group of Masonic symbols, most of them related to the first three degrees of Freemasonry (pictured at far left).  At the center, the engraver depicted an altar with an open Bible with a square and compasses on top of it, which represents the "Great Lights" of the lodge.  The Bible is flanked by two candles, another is above the Bible.  The candles are the emblems of the "Lesser Lights" of the lodge. An arch with a keystone decorated with the motto “Holiness to the Lord” surrounds these symbols. This emblem and motto typically relate to the Royal Arch degree. Although its history is sketchy, there seems to have been a mark lodge at Columbia Lodge in the early 1800s and the Royal Arch degree may have also been offered at the lodge around the same time.  As one scholar has noted, when the Ancients and the Moderns were at odds in Pennsylvania in the early 1800s, craft medals made for members of lodges that followed the Ancients often incorporated symbols associated with the Royal Arch degree. As seen on the certificate, which is addressed "To all Ancient York Masons," Columbia Lodge identified as an Ancient lodge. The Grand Chapter of Pennsylvania recognized Columbia Holy Royal Arch Chapter No. 91 in 1822.

Because of the iconography they share with the early 1800s certificate and the apron produced for Columbia Lodge, these medals were likely owned by members of the lodge.  However, many questions remain.  Hopefully further research will shed light on the men who commissioned them and what event prompted them to have the medals made.  If you have any observations to share, please leave them in the comments section. 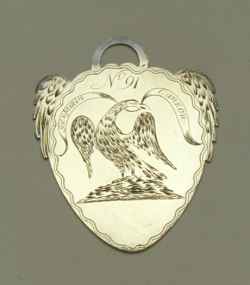 Abstract of the Proceedings of the Most Excellent Grand Holy Royal Arch Chapter of Pennsylvania (Philadelphia: Co-operative Printing Co., 1870), 92.

With many thanks to Glenys A. Waldman, the Masonic Library and Museum of Pennsylvania, Philadelphia.