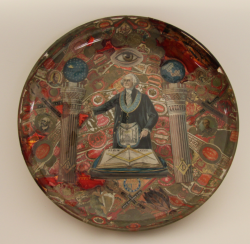 George Washington died of complications from an infection at the age of 67, at his home in Mount Vernon, Virginia, in December of 1799. The American public produced many elaborate and public displays of mourning after Washington’s death. Artists and manufacturers also marketed mourning art and memorabilia in his name. In addition to mass-produced memorial items, unknown individuals often also created memorial folk art to commemorate Washington’s legacy.

Decades later an unknown artist fashioned this glass plate into a Masonic portrait of George Washington using paper cigar bands and cut-outs of Washington. The decoupage plate depicts Washington as a Freemason and celebrates his Masonic connections.  Washington wears a Masonic apron and collar. He is surrounded by Masonic symbols, including the all-seeing eye, columns, and an open bible with a square and compasses. Washington’s likeness and the aforementioned symbols appear to have been cut from a Masonic print. Washington’s stance and Masonic regalia suggest the print was modeled after an 1868 Currier & Ives print titled Washington as a Freemason. This popular Masonic lithograph was copied multiple times in the late 1800s and early 1900s.

In the mid-1800s, cigar manufacturers began to hire lithographers to produce decorative and aesthetically pleasing artistic cigar labels and boxes for their products.  These labels and boxes featured miniature portraits of historic figures, animals, logos, and landscapes. By the early 1900s, consumers began collecting the cigar labels and sharing information about them in groups like the International Cigar Band Society, founded in 1934. Individuals also started to create folk art using the paper cigar bands.  A popular homemade craft in the early 1900s, “cigar band art,” as it was commonly called, included decorated ceramics, glassware, and jewelry.

Do you or someone in your family have Masonic related “cigar band art”? Let us know in the comments section below.