In Keeping with the Holiday Spirit

In the spirit of the holiday season, the staff of the Scottish Rite Masonic Museum & Library would like to thank the readers of the museum’s official blog for their support and to wish all our patrons happy and healthy Holidays. In this last post for 2017, we would like to highlight this festive panoramic document from the collection, a 1924 Christmas program created by the Al Malaikah Temple Shriners of Los Angeles, California.

If you happen to be in the metro Boston area during the holidays, please consult our website for more information regarding the museum's current exhibitions, including a wonderful exhibition of World War I posters, which celebrates the one-hundredth anniversary of America’s entry into the First World War. If you cannot make it to Lexington during the busy holiday season, please explore the Library and Archives' Digital Collections or the Museum's online collections.

Merry Christmas! From the Scottish Rite Masonic Museum and Library 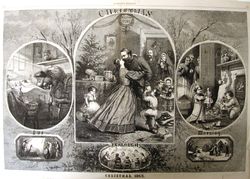 We wish you a Merry Christmas—with the help of an expert—illustrator and cartoonist Thomas Nast (1840-1902).  One hundred and fifty years ago—almost to the day—Nast’s employer, Harper’s Weekly Journal of Civilization, published this seasonal image drawn by Nast in their December 26, 1863 issue.

Nast had first created a festive illustration featuring Santa Claus engaged in a holiday activity for Harper's the year before. His 1862 illustration (published in early January of 1863) showed a slim but jolly Santa dressed in stars and stripes giving socks and other gifts to encamped Union soldiers.  For the pictured illustration, “Christmas 1863,” Nast again chose another Civil War 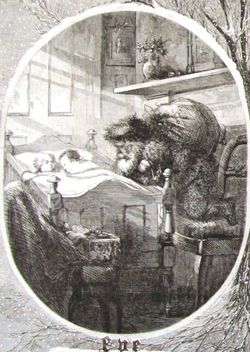 theme—this time a furloughed soldier returning home to celebrate the holiday with his family.  In six vignettes Nast paints a picture of an idealized Christmas.  The left-hand side of the image, called “Eve,” features a small scene of Mary, Joseph and the Baby Jesus in the stable.  A larger picture shows Santa—possibly having just come down the chimney—watching two sleeping children.  On the far right of the illustration, “Morning,” in one vignette, the same children play with recently unboxed toys and unpack  their tiny stockings.  In the smaller scene beneath it, adults exchange greetings outside church.  The center scene of the illustration, “Furlough,” steals the stage with its sentimental content.  In it, the returning soldier, having cast his uniform cap and gun aside, receives a fond embrace from his wife.  Visitors coming through the door greet the soldier with enthusiasm.  A Christmas tree, decorated with ornaments, candles and an American flag add to the sense of celebration, as does the small vignette of the family sitting down to a Christmas dinner.

Scholars credit Nast with helping popularize Santa Claus, who Americans first met in a few children’s poems, such as “A Visit from St. Nicholas,” (also called “Twas the Night Before Christmas”) published in the 1820s.  Nast’s Santa, seen by the thousands of readers of Harper’s Weekly and in illustrations he published elsewhere over the years, shaped Americans’ envisioning of Santa as round, jolly and festive—a picture of Santa that we still hold today.  The Scottish Rite Masonic Museum and Library counts over 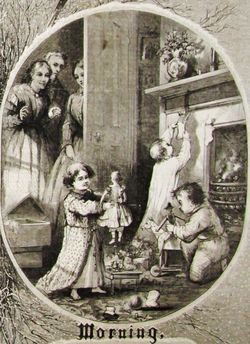 1,100 printed versions of Nast’s illustrations and cartoons in its collection.  The vast majority of these illustrations and cartoons feature’s Nast’s pointed comments on the politics and public figures of his day, but several strike a gentler note and mark the Christmas holiday.  We are glad to be able to draw on one of them to wish our blog readers very Happy Holidays! 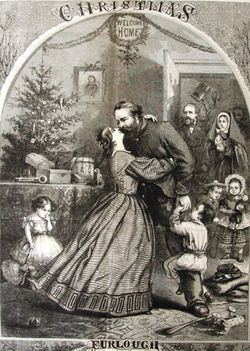