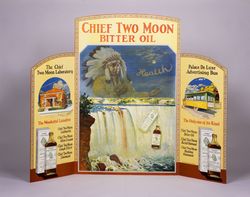 Advertising is one of my favorite primary sources for historical research. Ads can tell you so much about the time in which they were made. They can also tell you about some of the compelling characters who made and sold products.

Not much is known about Chief Two Moon, whose real name was Chico Colon Meridas, before 1914, when he moved east and began selling his patent medicines in New York and Philadelphia. Soon after, he met and married Helen Gertrude Nugent and set up shop in Waterbury, Connecticut. Although his marriage certificate states that he was born in Devil’s Lake, South Dakota, in 1888, historians have not been able to confirm this information. As his product’s name implies, he claimed to be of Native American descent, but this information is also unconfirmed. In fact, his 1933 obituary states that when he died, the Department of the Interior had recently refused to certify him as an Indian. Biographers have suggested that his father, Chico Meridan, was Mexican, but this too is unconfirmed. One thing seems clear, however. He took his pseudonym from his mother’s maiden name, Mary Tumoon.

Chief Two Moon’s popular patent medicines and his practice as a naturopath made him a wealthy man. Sales took off following the 1918 influenza epidemic, when, according to newspaper accounts of the time, none of his patients died. By his death in 1933, “his immense [medical] ‘practice’ was more than mere legend,” according to the New York Times.

A clever salesman, he hawked his products by combining modern advertising practices with Americans’ romantic ideas about Native Americans’ healing powers in the 1920s. As seen in this advertisement, which is featured in our new exhibition, "Curators' Choice: Favorites from the Collection," depictions of his motorized advertising bus—“The Only one of its Kind”—and his 1925 Waterbury, Connecticut, laboratory—implying that he used scientific manufacturing techniques—flank the mystical central image of a contemplative Indian above a powerful waterfall. The word “Health” magically floats between the waterfall and the moon. At the time, a number of patent medicine companies featured Indians in their advertising because the American public believed that Native Americans, especially their medicine men, had knowledge of herbal remedies through a deep connection with the natural world. But Chief Two Moon claimed to be the real deal.

The last few years of Meridas’s life contained both honors and difficulties. The Oglala Sioux Tribal Council named him an honorary chief on August 6, 1930, for his philanthropy, providing cash, food and other supplies for the tribe. However, he was also faced with several lawsuits in New York and Connecticut for practicing medicine and naturopathy without a license. He died on November 3, 1933, of liver failure. His wife continued to sell the Chief Two Moon products long after her husband’s death.

The Mattatuck Museum Arts and History Center has a number of objects related to Chief Two Moon and his products. Here is one example.