Does This Building Ring a Bell? 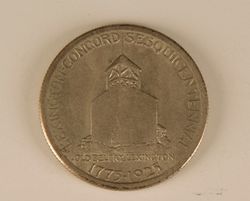 Did you know that the Old Belfry is the only site in Lexington, Massachusetts, to ever appear on an official United States coin?  In 1925, the United States Mint issued over 162,000 Lexington-Concord Sesquicentennial Half Dollars to mark the 150th anniversary of the opening battles in the American Revolution.  Each silver half dollar bore the image of the Old Belfry on the reverse or back side, along with Daniel Chester French’s (1850-1931) Minute Man statue from Concord, Massachusetts, on the obverse or front.  The National Heritage Museum owns two of these coins, which it received in 1991, along with their original presentation boxes.

The town of Lexington originally built the Old Belfry in 1762 on land owned by Jonas Munroe. Six years later, the Belfry was moved to the town common, where it stood during the Battle of Lexington. On the night of April 19, 1775, the Belfry’s bell sounded the alarm that the British regulars were coming.  While the original Belfry was destroyed in 1909, the Lexington Historical Society built an exact replica in 1910 on its original Belfry Hill location. 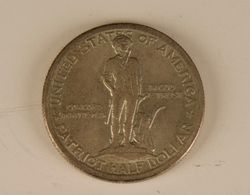 During the months leading up to the anniversary celebration, the United States Lexington-Concord Sesquicentennial Commission came up with the idea for the commemorative half dollar, and created a preliminary design for the coin.  Next, the Commission, which was primarily composed of residents of the two towns, hired noted sculptor Chester Beach (1881-1956) to turn their blueprint into a metallic reality.  While Beach is most famous for his marble and bronze statues and busts, including The Unveiling of Dawn (1913) and Fountain of the Waters (1927), he also designed the Monroe Doctrine Centennial Half Dollar (1923), and produced the models for the Hawaii Sesquicentennial Half Dollar (1928). 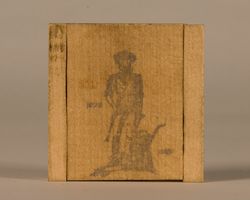 Although Beach had his own ideas of how the coin should look, the Commission insisted that he follow their predetermined design.  In the end, he reluctantly created models for the coin that met the Commission’s exact specifications, but refused to sign the design as he had done for his previous half dollars.  Each coin came in a pine presentation box, with the Concord Minute Man and the Belfry, respectively, printed on the lid and the bottom of the box.  While Beach may not have been satisfied with the final product, fairgoers in Lexington and Concord liked the coins enough to buy 60,000 of them between April 18 and 20, 1925.  An unseasonable snowfall impacted the turnout for the fair, which featured a reenactment of the battle at the North Bridge in Concord, and an elaborate military parade afterward.  Collectors in New England bought most of the leftover coins.

While the Massachusetts State Quarter, issued in 2000, showed a figure resembling the renowned Minute Man statue in Concord, the Lexington-Concord Sesquicentennial Half Dollar remains the only legally issued American coin to depict a Lexington landmark.  Will the Mint recognize Lexington again in 2025, for the 250th anniversary of the Battles of Lexington and Concord?  We hope so!