The Persistence of "Cerneauism": The 1950s 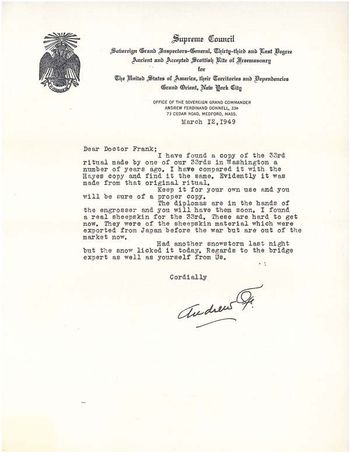 In the late 1800s, the Supreme Councils for the Northern Masonic Jurisdiction (NMJ) and the Southern Jurisdiction (SJ) began using the wonderfully peculiar word "Cerneauism" to describe the "clandestine" Scottish Rite bodies that persisted after the Union of 1867 had merged two previously competing Supreme Councils in the northeast to form the present-day NMJ. Cerneauism referred to Joseph Cerneau [pdf]and to the fact that these bodies traced their organizational roots (sometimes aspirationally) back to organizations formed by Joseph Cerneau in the early nineteenth century.

Until recently, historians have assumed that Cerneauism ended within the first two decades of the twentieth century. In their 2008 book, Committed to the Flames: The History and Rituals of a Secret Masonic Rite, Arturo De Hoyos and S. Brent Morris wrote that "the Cerneau movement ended in 1919 when M.W. Bayliss [the Sovereign Grand Commander for the Thompson-Folger Supreme Council] died." I was under the same impression as well until the Scottish Rite Masonic Museum & Library recently received a small gift of material related to the Thompson-Folger Supreme Council. This material shows that the Supreme Council was active as late as 1951.

The material we received mostly consists of pamphlets published by this Supreme Council. In one - A Brief History of the U.S. Jurisdiction - the author lists the Sovereign Grand Commanders from 1881 until 1951, including the starting year of their term after their names:

Pictured above is the one letter that came with the collection. It is dated March 12, 1949 and addressed to Frank B. Spengler (1881-1957) from Andrew F. Donnell (1878-1967). Donnell, a newspaper reporter based in Melrose, Massachusetts, served as Sovereign Grand Commander of the group from 1944 until at least 1951. Spengler, a medical doctor based in Baldwinsville, New York, was his Lieutenant Grand Commander. (The content of the letter is itself interesting, but beyond the scope of this post.)

Both men were active in their local lodges - Donnell with the Lodge of Eleusis and Fourth Estate Lodge, Spengler with Ark Lodge No. 33. These lodges were recognized subordinate lodges of the Grand Lodge of Massachusetts and the Grand Lodge of New York, respectively. Membership inquiries to both Grand Lodges show - perhaps suprisingly - that both men died as members in good standing. Donnell was even Master of his lodge (the Lodge of Eleusis) in 1942, just two years before taking over the helm for the Cerneau Supreme Council.

Grand Lodges, although outside of the Scottish Rite system, often reminded their members not to participate in unrecognized appendant bodies and sometimes expelled members who continued to participate. At this point there is not enough other evidence to know why both men continued to enjoy their blue lodge membership despite their participation in a clandestine Scottish Rite body. It is possible that, for example, some time between 1951 (the latest info we have on these two men's participation with this Supreme Council) and the death of Spengler in 1957, that they may have been asked to choose between maintaining their blue lodge membership or their participation in an unrecognized Scottish Rite organization and may have chosen the former. It is also possible that, with only two subordinate bodies, the much-diminished Supreme Council may have passed below the radar of both Grand Lodges. It is difficult to imagine a third possibility in which these two Grand Lodges would have simply tolerated Donnell's and Spengler's continued leadership of the Cerneau Council.

If you have any information about the activities of this Supreme Council during the 1940s and 1950s, we'd love to hear from you!