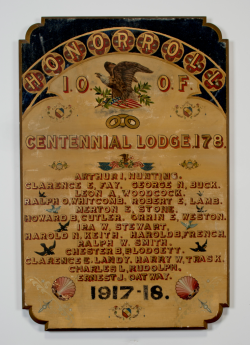 Along with lodge furniture and banners associated with a group of Massachusetts Odd Fellows, the Scottish Rite Masonic Museum & Library recently purchased this painted sign for the collection.  Centennial Odd Fellows Lodge No. 178 in West Boylston, Massachusetts, commissioned this decorative sign to honor eighteen lodge members who fought in World War I.

Museum volunteer researcher Bob Brown recently dug into the service histories of the men listed on the sign in preparation for the exhibition, “Americans Do Your Bit: World War I in Posters,” which opens on June 3, 2017.  To uncover information about the eighteen men listed on the sign, Bob consulted records housed at the National Guard Museum and Archives in Concord, Massachusetts, and resources available online.  His research into the occupations and wartime experiences of the lodge members listed on the honor roll hints at how many men experienced World War I.

Before they left to join the Army or the Navy, members of Centennial Lodge No. 178 worked locally in different professions.  The largest number of men listed on the sign worked in area factories in different positions.  Two were supervisors, one was a plumber, one was a machinist and another was a tool maker. Four members of the lodge who served in World War I earned their livings as farmers.  The group on the honor roll also included clerks, a doctor, a college student and a college instructor.  Four of the men also belonged to Boylston Masonic Lodge before the war.  Three joined the Masonic lodge afterwards.

Of the eighteen men in Centennial Lodge who served, the youngest was 21 and the oldest was 42.  Most were in their twenties, reflecting the age of the millions of men who registered for the draft in 1917 and 1918.  The Selective Service Act required that men from age 21 to 31 register. Though many volunteered, over 70% of the American men who served in World War I were drafted.  At least seven of the men listed on Centennial Lodge’s honor roll were drafted and inducted, illustrating the national trend.  The others listed on the honor roll volunteered, were appointed or the records about their service are unclear.  Two of the men listed on the honor roll were foreign born, one in England, the other in Canada.

Seven of the Centennial Lodge members who served were sent overseas; the rest filled military roles in the United States.  Lodge member and dairy farmer Harold N. Keith (1890-1918), whose name is listed on the sign, was killed in action in France. His fellow member, Arthur I. Hunting (1876-1938) received an injury during his service.  Each surviving member of Centennial Lodge had to resume his life and occupation after his time in the Army or Navy concluded.  The painted sign reminded all who saw it of numerous Americans’ shared effort and, in many cases, sacrifice, during and after the war.

Posted at 07:29 AM in "Americans, Do Your Bit" World War I in Posters, Centennial Lodge No. 178, West Boylston, Massachusetts, Independent Order of Odd Fellows, Posts by Hilary Anderson Stelling, World War I | Permalink | Comments (0)