Keep Within Compass, or, A Tempest on a Teapot 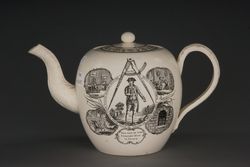 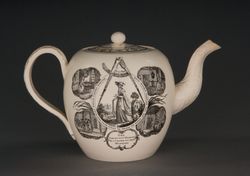 This transfer-printed teapot from the late 1700s is not only charming, it also communicates an important social message. Through slogans and illustrations, it reminds both husbands and wives to abide by a moral code of self-restraint and to “keep within compass.” The prints on each side of the teapot—one featuring a man; the other, a woman—depict the rewards of proper behavior versus the dangers of temptation. A large central image, contained within a compass’s legs (“within compass”), presents an idealized view of the perfect life in the late 1700s.  Around each of these main illustrations, four vignettes provide cautionary tales of the ruin that awaits those who eschew a virtuous life.

In the large vignette on one side, the well-dressed gentleman, bags of money at his feet, is surrounded by bountiful fields, a large mill, and men working on his farm. On the other side, the fashionable lady is similarly surrounded by her elegant home, a trunk of pretty things and her loyal dog. Both sides also feature the proverb, “Keep within compass and you shall be shure to avoid many troubles which others endure,” as well as the brief admonitions, “Fear God. Know thyself. Bridle thy will. Remember thy end.” The vignettes around these central images show dangers that an imprudent person could easily fall into, including ruined reputation, prison, and shipwreck—a metaphor for lost fortune. Biblical sayings—“The end of the upright man is peace” and “The virtuous woman is a crown to her husband,” respectively—appear below each image. 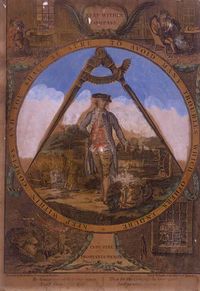 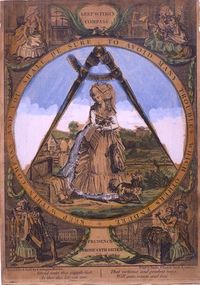 A large percentage of the Museum's collection relates to Freemasonry and other fraternal organizations, so we found the iconography on this teapot familiar. The compass is a central Masonic symbol, representing restraint, but this teapot’s manufacturers may have selected it because its meaning of self-control was familiar to society at the time. The images on this teapot appear to be inspired by, though not directly copied from, a pair of prints made in 1786 by London printmaker Carington Bowles (1724-1793), also in the Museum’s collection, reproduced here. These prints may in turn have been inspired by two series of prints by William Hogarth, “A Harlot’s Progress” (1732) and “A Rake’s Progress” (1735), which depict the downfall of a formerly innocent woman and man through drink and seduction.

In the late 1700s, when this teapot was made, tea-drinking was a socialactivity. According to 1700s French lawyer Méderic Louis Élie Moreau de St. Méry, in America “friends, acquaintances and even strangers are invited” to join the family for tea. How you set your table told your guests something about your financial standing, taste and place in the world. So this teapot not only reminded the family to be honorable people, it also conveyed a message about the family’s moral character to their guests—that they valued—and perhaps aspired to—the morals that the prints' designers highlighted. The Museum’s Public Programs Coordinator, Polly Kienle, selected this teapot to include in the exhibition, "Curators' Choice," which features the staff's favorite objects from the collection. Of this teapot, she said, “I wonder what kind of teatime discussions this pot triggered between the couple who owned it.”