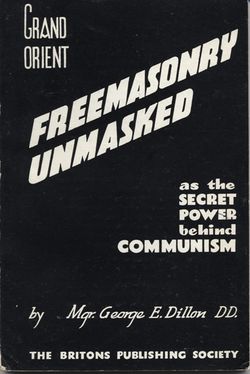 The title of the current exhibition in the Library and Archives reading room - Freemasonry Unmasked!: Anti-Masonic Collections in the Van Gorden-Williams Library and Archives - is drawn from the book shown here (and on view in the exhibition): Grand Orient Freemasonry Unmasked as the Secret Power Behind Communism. The cover of this book is an example of how Freemasonry has been blamed as the secret power behind just about everything.

Although published in 1956, the text of this book actually reproduces a lecture that a Catholic priest delivered in Scotland in October, 1884. At that time, the Vatican had just issued Humanum Genus: Encyclical of Pope Leo XIII on Freemasonry, an official declaration of the Catholic Church’s opposition to Freemasonry. The Vatican's 1884 document claimed that Masons were “planning the destruction of the holy Church publicly and openly, and this with the set purpose of utterly despoiling the nations of Christendom.”

Grand Orient Freemasonry Unmasked was published by the Britons Publishing Society, a group that formed in 1923, and which was an off-shoot of the Britons, a group that formed in England in 1919 for the express purpose of disseminating anti-Semitic propaganda. While the name Britons Publishing Society doesn't sound particularly threatening, one historian has called them "one of the most extreme of the post-1918 formations on the radical and far right" in England. A quick search of the British Library's online catalog reveals a number of both anti-Semitic and anti-Masonic titles published by the Britons Publishing Society. One title in particular stands out and is the likely key to the the group's interest in Freemasonry: according to one source, the Society published 85 different editions of The Protocols of the Elders of Zion over a forty-year period, including two separate editions during World War II.

Why would the Society's interest in The Protocols point to an interest in anti-Masonry? First published in Russia in 1905, The Protocols of the Elders of Zion is a notorious work of anti-Semitic propaganda. The book purported to document a secret conference at which the Elders of Zion, a fictitious Jewish group, discuss using Freemasonry to deceive humanity and attain worldwide domination. Both the text and the meeting are complete fabrications. Regardless, the book persists as a popular piece of propaganda even today.

You can learn more about the overlap between anti-Masonry and anti-Semitism here: http://www.ushmm.org/wlc/article.php?lang=en&ModuleId=10007186

Here's a good intro to the history of the relationship between the Catholic Church and Freemasonry: http://freemasonry.bcy.ca/texts/RomanCatholics.html

For more on history of The Protocols of the Elders of Zion, the United States Holocaust Memorial Museum has a great online exhibition about this forgery: http://www.ushmm.org/wlc/article.php?lang=en&ModuleId=10007058

If you are interested in any of the topics above, be sure to check out the two bibliographies we've prepared which will point you to helpful resources so that you can learn more about both Freemasonry and anti-Masonry.

Also, be sure to check out Chip Berlet's guest blog post from last week. Berlet, a Senior Analyst with Political Research Associates, will be speaking at the Museum on Saturday, October 24th, 2009, at 2 p.m. in the Farr Conference Center. His talk is in conjunction with Freemasonry Unmasked!: Anti-Masonic Collections at Van Gorden-Williams Library and Archives, on view through May 15, 2010. To learn more about this free public lecture generously funded by the Lowell Institute, click here.