A Nod to Freemasonry 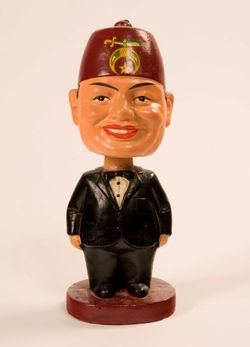 Bobblehead dolls – do you love them or hate them?  Do you have any in your office or your house?  Recently, the National Heritage Museum received two Masonic bobblehead dolls – both depicting Shriners (members of the Masonic group Ancient Arabic Order of the Nobles of the Mystic Shrine) – joining two others already in the collection.

Our Collections Committee – which reviews all objects offered to the Museum by gift or purchase – was charmed by these toys.  Bobbleheads, also known as “nodders” or “bobbers,” seem to date back to at least 1842.  In his short story, The Overcoat, published that year, Nikolai Gogol described a character as having a neck “like the neck of plaster cats which wag their heads.”  In the 1920s, a New York Knicks basketball player bobblehead was produced and enjoyed some popularity, but it quickly waned.  In the 1960s, sports figure bobbleheads came into vogue once again and since that time, innumerable popular figures have been immortalized with their heads on springs.

Three of the Museum’s Shriner bobbleheads date from the 1960s, including the one shown at left.  These dolls have plaster heads on springs.  The figure wears a black suit with a white shirt and a typical maroon fez with a black tassel and a yellow and green Shrine symbol.  Unfortunately, we do not know exactly when or where this bobblehead originated.  It may have been a souvenir from a specific Shrine event, or perhaps just a whimsical toy that the original owner purchased.  Bobbleheads seem to be a perfect fit for Shriners – the group is known as “the playground of Freemasonry.”

We also have a Shriner bobblehead from about 2003, which a museum staffer purchased at our Heritage Shop and recently donated to the collection.  This newer doll has a plastic head and body, but shows remarkable similarities to our earlier ones.  Compare the photo of the plastic one at right to the plaster-headed bobblehead above. 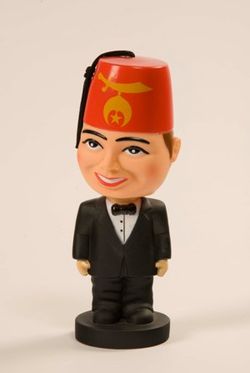 Do you have any other Masonic or fraternal bobbleheads?  If so, we’d love to hear about them in a comment below!