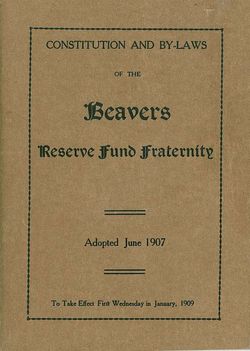 Life insurance companies are, naturally, risk averse. And they were back when they existed as mutual benefit societies. The 1907 Constitution and By-Laws of the Beavers' Reserve Fund Fraternity (pictured here), a mutual benefit society established in Stoughton, Wisconsin in 1902, made it clear that people whose occupations were dangerous were disqualified from being members. Here's Section 9 of the By-Laws:

No person engaged in any of the following occupations shall become a beneficial member of the Fraternity:

The list is both a chilling reminder of some dangerous occupations (oil well "shooters") and also contains some reminders that even the whimsical-sounding jobs (trapeze performer) are there for a reason.

Today, the Bureau of Labor Statistics keeps track of occupational injuries and fatalities [pdf], which you might be more familiar with as a news story about the most dangerous jobs in America.

Stay tuned for more on the Beavers in an upcoming post.