Masonic Fun Down on the Boardwalk! 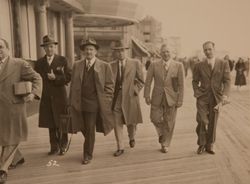 While the National Heritage Museum collects and appreciates formal photographs of Masonic and fraternal groups – see last week’s post on a photograph of the officers of Boston’s St. John’s Lodge – we have a soft spot for less formal images too.  So, when Carole Collins Slattery brought us this photograph of her father and some of his Masonic brothers walking along the boardwalk in Atlantic City, we were very excited.  If you look closely, the men are carrying their Masonic apron cases!  This is just the kind of object that helps us explore Freemasonry for our visitors – not just the rituals and formal activities, but the brotherhood that members feel for each other.

Mrs. Slattery could also identify one of her father’s friends in this photo and passed along the information that the men were attending a Masonic meeting in Atlantic City when the photo was taken.  The photo was taken in 1952 when Mrs. Slattery’s father, Cecil L. Collins (1900-1979), was Master of Azure Lodge No. 129 in Cranford, New Jersey.  Collins is depicted second from the left in the photo.  The man to his right, with his coat open, is Harold “Pappy” Hansen.

Do you have any photographs showing more informal lodge events?  If so, let us know in a comment below!