Rare "Ast Ritual" Given to Library 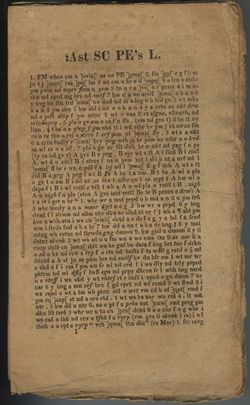 The Scottish Rite Masonic Museum and Library recently acquired two copies of a uniquely American Masonic ritual - the Reverend Daniel Parker's Masonic Tablet (New York, ca. 1822), which was the first published American cipher ritual. The Masonic Tablet was published with no title page and is often referred to as the “Ast Ritual,” a reference to the first word on the first line of the book (shown here).

Both copies were a gift of the Pittsfield Masonic Association of Pittsfield, Massachusetts. The gift includes one complete copy of the 28 page book and a second copy of the same edition, but lacking the last four pages. As well, we received a separately printed four-page glossary of cipher words (also originally printed ca. 1822) with their translations, printed in two columns. The Masonic Tablet contains Craft and/or Chapter ritual in cipher and was printed around 1822 in both a 28 page version and a 44 page edition. The only other known copy of the 28 page edition is in a private library. This gift to the Scottish Rite Masonic Museum and Library triples the number of known copies of the 28 page book and makes the Van Gorden-Williams Library and Archives the only Masonic library in the world to hold two copies of this important, early Masonic ritual.

The book’s striking cipher (see detail at right) uses five different methods to conceal the text: letter and number substitution, omission of letters, inclusion of meaningless letters between backward brackets, numbers and punctuation marks, words spelled backwards, and the inclusion of foreign words. This is in stark contrast to the many plain-English (i.e. unencrypted) ritual exposures that followed Parker’s Tablet in the 1820s and 1830s, which clearly aimed to reveal Masonic ritual to non-Masons. Indeed, it’s difficult to imagine that anyone who wasn’t already familiar with Masonic ritual would have easily deciphered the text of the Ast Ritual. As for the content, according to one Masonic ritual expert the Masonic Tablet likely contains the ritual that lodges in and around New York City in the 1820s would have used. Although the book was printed without publishing information in the book itself, Masonic historian Arturo de Hoyos and bibliographer Kent Walgren, using secondary sources, have reasonably attributed the printing of the book to New York (possibly Kingston) in 1822.

Proceedings of the Grand Chapter of Royal Arch Masons of the State of New York, as well as the Grand Lodge of New York from the early 1820s, contain information about the Masonic trials that took place when it became known that the Reverend Daniel Parker (1774-1835), a Freemason, was advertising and selling a memory aid containing Masonic ritual. In publishing his cipher, Parker raised the ire of both the Grand Lodge and Grand Chapter of New York. It appears that Parker went to great lengths to conceal, rather than reveal, Masonic ritual and likely intended his book as a memory aid for other Freemasons to learn ritual. Despite this, upon hearing about Parker’s book, the Grand Lodge adopted a resolution in 1822 that condemned the use of all books or manuscripts explaining Masonic ritual. Four years later, Parker was expelled by the Grand Chapter of New York. The Grand Chapter got involved because some editions of the Masonic Tablet contained the Capitular (i.e. Royal Arch Chapter) degrees and the Grand Chapter stated that Parker had “rendered himself a dangerous member of our fraternity.” They also claimed that he had “violated one of the most important of our Masonic obligations, by printing or publishing, or causing to be printed and published, a work calculated to expose some of the mysteries which bind together and preserve our fraternity.” Parker was expelled from the Grand Chapter of New York on February 10, 1826. It is not known how many copies of Parker's Masonic Tablet were printed. Today, there are only six known copies of any edition/state of the Ast Ritual. As this gift proves, others may emerge in the future.

The Scottish Rite Masonic Museum & Library is grateful to the Pittsfield Masonic Association for this important gift. If you have something rare and unusual in your lodge's library, why not drop us a line and ask us about it?

If you are interested in learning more about Daniel Parker's Masonic Tablet, the following two sources, which I relied upon for the information above, are invaluable: