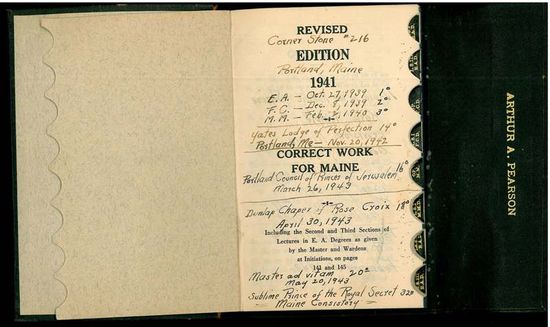 As we've written about previously, Masonic ritual ciphers are books that serve as memory aids for Masons memorizing various portions of Freemasonry's first three initiation ceremonies. These cipher books are, in many cases, more than just the sum of the text they contain. They are, in many instances, personal objects and show evidence of previous owners.

Pictured above is a cipher book once owned by Arthur A. Pearson (1904-1997) of Portland, Maine. On the title page (below, right), Pearson recorded the dates of all the important Masonic degrees that he had participated in or witnessed. Pearson joined many Masonic organizations - the list that starts on the title page continues onto the reverse of the title page. This book is currently on view in the Van Gorden-Williams Library & Archives reading room exhibition, Secret Scripts: Masonic and Fraternal Ritual Books, at the Scottish Rite Masonic Museum & Library.

Pearson's cipher book fits neatly into what David Pearson, in Books As History, has called "the importance of books beyond their texts." Although the book flap that keeps the cover closed has Pearson's name nicely embossed on the inside of it, the book offers more than just provenance (i.e. history of ownership). It is a record of Pearson's Masonic participation. 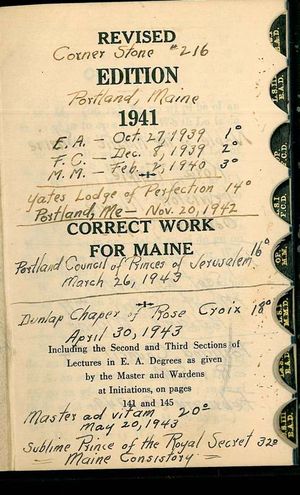 "Your Committee on Masonic Cipher has carefully considered the matter referred to it. Ciphers are not approved by the Grand Lodge. Neither is their use forbidden. The present practice appears to satisfy the need. Your Committee, therefore, recommends that no legislation on this subject by Grand Lodge is expedient at this time."

The Committee had been appointed in response to a report of Charles E. Crossland, the Grand Lodge's Grand Lecturer in 1940. The Grand Lecturer, among other duties, travels to the subordinate lodges in the state, inspecting the ritual work of the lodges and insuring that it is well done. Crossland noted that, in four years as Grand Lecturer, "not a dissenting voice" had been heard in terms of Maine Masons using ciphers. Yet he also noted that the Grand Lodge did not officially approve of them either. He continued "Has not the time come when the Grand Lodge shall face this issue squarely? If we are to tacitly consent to the use of these 'Ciphers' should we not supervise their preparation and handle their sale? Before action is taken, it is possible that a committee should study the full significance of such action and what might be involved if it seems wise to adopt such a plan."