Asher Benjamin's 1806 book American Builder's Companion: or, A New System of Architecture: Particularly Adapted to the Present Style of Building in the United States of America had a great impact on New England architecture. Our copy is of particular interest because it once belonged to John Nelson (1789-1859), a carpenter and housewright who built or worked on many of the 19th-century homes in Lincoln, Massachusetts. The book is a practical guide to architectural styles, and we can assume that this book was probably used by Nelson as he worked as a housewright and a carpenter.

In addition to the book, the National Heritage Museum also owns a number of tools that once belonged to John Nelson. You can see some of them on display in the current exhibition Sowing the Seeds of Liberty: Lexington an the American Revolution, currently on view in our galleries.

The John Nelson House, pictured above, is located in Lincoln, MA in Minute Man National Park. The photograph seen here is from the Historical Architectural Buildings Survey, taken in 1961. There are more photos available online, courtesy of the Library of Congress' Prints & Photographs Division.

Links to more material
-Lincoln Public Library have the Nelson Family Papers in their collection, including a number that relate to John Nelson. A finding aid for that collection is available online.

-A digitized version of American Builder's Companion from the University of Wisconsin.

And here's a more complete citation for our John Nelson copy of Asher Benjamin's book:
Benjamin, Asher. American Builder's Companion: or, A New System of Architecture: Particularly Adapted to the Present Style of Building in the United States of America. Boston: Etheridge & Bliss, 1806.
Call number: RARE NA 2610 .B4 1806

Posted at 09:00 AM in Architecture, John Nelson, Marks in books, Posts by Jeff Croteau | Permalink | Comments (0) 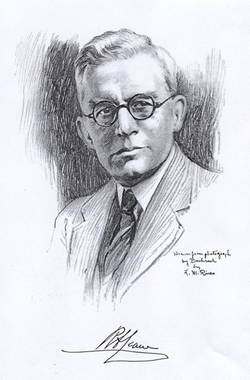 In 1881, at seventeen, Ralph Cram (1863-1942) left his family in Hampton Falls, New Hampshire and moved to Boston, Massachusetts.  This move began a new phase of his life.  His father, a Unitarian minister, had arranged an apprenticeship for him with the firm of Rotch and Tilden.

Letters held in the VGW Archives from Ralph Cram to his mother, Sara Elizabeth Cram, chronicle the activities of the young apprentice. Ralph Cram writes about the sketches he is working on for Arthur Rotch.  After working for the architectural firm for one year, Ralph Cram started making a small salary and by 1884 he was making $20.00 per week.  During the early 1880’s, Ralph mentions to his mother that some of his drawings have been published in a New York magazine.  The perspective sketches he worked on were praised by Arthur Rotch.

In addition to his interest in architecture, Ralph Cram went to symphony concerts, plays, opera, and the art museum in Boston.  Cram read books on many subjects. John Ruskin (1819-1900) was one of his favorite philosophers. He wrote his mother about his faith compared with what he was reading in philosophy and science.  At this time in Boston, Copley Square, Trinity Church, the Museum of Fine Arts, and the Public Library were all in one area.  Cram made the most of all the cultural enrichment that Boston has to offer.  In December of 1884, Ralph mentions to his mother the hopes of traveling to Europe and how to finance a trip.

The image above is from the book My Life in Architecture by Ralph Cram (NA 737 .C7 A5 1937).  Both this book and the Collection of Letters from the Sanborn and Cram Families (USM 006) were donated by Charles A. Parker.  Ralph Cram's letters to his mother are among the many letters of this collection of about 300.

The Sanborn and Cram families were both from Hampton Falls, New Hampshire.  The families were related by the fact that a Sanborn married a Cram and the two families remained friends. Their correspondence spans the time period of 1834-1884 in the Boston and Concord areas.