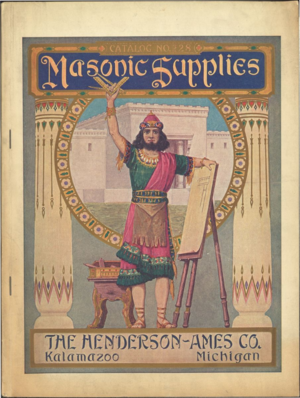 This eye-catching cover depicts Hiram Abiff, the protagonist of Freemasonry’s first three degrees. A legendary character, Abiff is King Solomon’s chief architect. The character of Abiff is depicted heroically on this cover, standing next to a drafting board with his arm raised and his hands holding the most recognizable Masonic symbols—the square and compasses. Imaginative images such as this, as well as the costumes for sale in the catalog, could help members and candidates enter into the theatrical drama of Masonic initiation.

"Aprons, Robes, and Thrones: Fraternal Regalia Catalogs in the Library & Archives Collection" is currently on view in the Van Gorden-Williams Library & Archives reading room at the Scottish Rite Masonic Museum & Library. The two catalog covers shown here are among the objects on display.

Between 1865 and 1900, more than 235 fraternal organizations were established, comprised of nearly six million members. Participation in these groups played a large part in American life, with one in every five American men belonging to one or more fraternal societies from 1870-1910. Most of these groups communicated their ideas and symbols through ritual. Regalia, including fraternal aprons and costumes worn to portray kings, knights, and other figures were integral to some fraternal orders’ elaborate degree rituals. 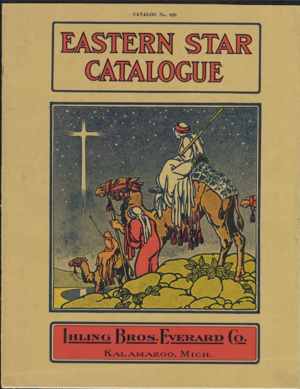 The Order of the Eastern Star is a Masonic women’s auxiliary group. “Eastern Star” refers to the biblical passage found in the Book of Matthew in which the Three Kings travel to Bethlehem to pay homage to the newborn Jesus: “We have seen his star in the east, and are come to worship him.” The cover of this catalog depicts this scene.

Following the end of the American Civil War, regalia companies marketed and sold their factory-made regalia and supplies to fraternal lodges throughout the United States. Companies produced catalogs that advertised everything necessary to furnish a lodge, including regalia, furniture, minute books, and jewels. Costumes for characters portrayed in fraternal degrees could be purchased in an array of styles and prices. To make their products as attractive as possible, manufacturers produced catalogs illustrated by drawings, engravings, and photographs.

The Van Gorden-Williams Library & Archives collection holds over 300 Masonic and fraternal regalia catalogs, dating from the late 1860s to the present. Today, researchers and curators use regalia catalogs to visualize fraternal lodges and help identify historical regalia in the collection of the Scottish Rite Masonic Museum & Library. For everyone, regalia catalogs are a visually sumptuous step back in time.