Happy 40th! A Look Back at the Museum & Library's Grand Opening 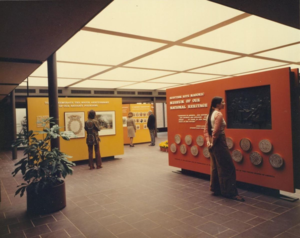 Forty years ago today, on April 20, 1975, the Scottish Rite Masonic Museum & Library officially opened its doors to the public - two hundred years and one day after the Battle of Lexington. Over 1,400 people attended the opening day ceremonies, a crowd that included local school children, Active Members of the Scottish Rite's Supreme Council, Northern Masonic Jurisdiction, state and local politicians, and representatives of various state and national-level Masonic organizations, as well as many local citizens. The Museum's first director, Clement M. Silvestro (1924-2014), predicted that the Museum & Library - opened in time to celebrate the U.S. bicentennial in 1976 - would be "counted among the enduring projects emanating from the Bicentennial commemorative events." Among the first exhibitions was an "orientation exhibition" (pictured above) in the Museum's lobby which "explained that the new Museum and Library is sponsored by the Scottish Rite of Freemasonry in the Northern Jurisdiction of the United States of America [and] was built to commemorate the 200th anniversary of our Nation's founding..." 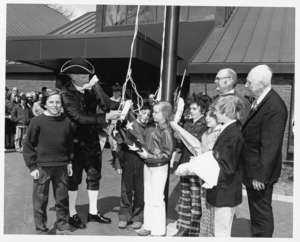 A recounting of the day's events in the Supreme Council's 1975 Annual Proceedings, includes a description of the flag raising ceremony (photo at right):

"Prior to the dedication ceremonies, students of the Lexington Public Schools presented the Museum with a thirteen-star flag, and raised it to the accompaniment of musket fire from the Minuteman Guard of Honor, and a musical salute by the Linn Village Drum Band. The fifth graders participating in the flag raising ceremony were George Young and Mary Lyons from the Adams School, Laura Taylor and Keith Johnson from the Munroe School, and Micah Sheveloff and Stephen Shapiro from the Bowman School." 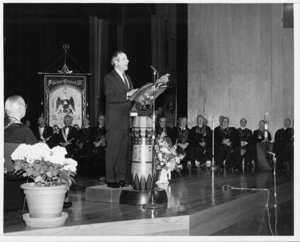 Following the flag raising, a dedication ceremony took place in the Museum's auditorium. Members of the Scottish Rite's Supreme Council, led by then-Sovereign Grand Commander George A. Newbury, conducted a "richly symbolic and dramatic Masonic ceremony." Secretary of the Air Force, John L. McLucas, then delivered a dedicatory address. After McLucas spoke, Silvestro, the Museum's Director, standing at a lectern that's now part of the Museum's collection, delivered his own address to the packed auditorium.

Were you at the Museum & Library's "Dedication and Grand Opening" on April 20, 1975? Tell us about it in the comments below. If you took photos that day, we'd especially love to hear from you!