A Fashionable and “Ancient” Masonic Chair 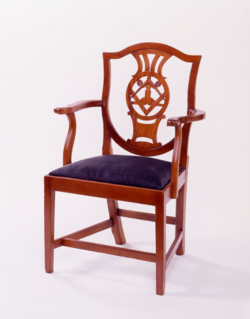 At a quick glance, this mahogany chair in the collection of the Scottish Rite Masonic Museum & Library resembles other fashionable armchairs produced in New England during the late 1700s and early 1800s. A second look shows that a craftsman designed this chair with a Masonic customer in mind. He decorated the center of the back of the chair, or splat, with cleverly carved overlapping compasses, a square and a level. Two rosettes help anchor the symbols to the circle enclosing them.

While the symbols on the chair’s splat are Masonic, its overall design follows the popular style of the day. In creating fashionable home furnishings in the late 1700s and early 1800s, American furniture makers often looked to English examples for models of stylish work. This chair, with its shield shaped back, short, curved arms and elaborately pierced splat shows some of the stylish elements codified in The Cabinet-Maker and Upholsterer’s Guide; or Repository of Designs for every Article of Household Furniture in the Newest and Most Approved Taste. Alice Hepplewhite (dates unknown), the widow of furniture maker George (d. 1786), first published this illustrated work in London in 1788. Some American furniture makers knew about Hepplewhite’s and similar British pattern books, such as Thomas Sheraton’s The Cabinet-Maker and Upholsterer’s Drawing-Brook, first published in 1791. These books were also one way Americans learned about the latest fashion. Americans formed their impression of the current modes by  viewing furniture in shops and homes and from up-to-date engravings and illustrations imported from Britain and Europe. Clients ordering furniture relied on craftsmen to be conversant with fashions of the day, but made specific requests about style, materials and cost, to see their wishes in fashionable furnishings fulfilled.

Unfortunately, we do not know who first ordered this chair, or what purpose it was intended to serve. Did the person who commissioned this chair want to use it at home, or was it made to beautify a lodge room? Judging from this chair’s style, manner of construction and materials, it was crafted in New England, perhaps in Boston, Massachusetts. An inscription on the frame of the upholstered seat notes it was “Originally the property of Genl. Amasa Davis.” Though intriguing, this note does not clarify this chair’s origin. Amasa Davis (1742-1825) of Boston, a merchant, was quartermaster general for Massachusetts from 1787 to 1825 and used the title of General. However, no record points to him having been a member of a Masonic lodge. As well, several men named Amasa Davis made their home in Massachusetts during the time this chair was first made. One even belonged to Morning Star Lodge in Worcester, Massachusetts, though little more is known about him. Fortunately records from Union Lodge in Dorchester, Massachusetts, speak to the chair’s later history. Member John Mears, Jr., (1821-1912), gave an “ancient masonic chair” to Union Lodge in 1864. His gift was one of several presentations of furniture made to the lodge to mark the organization’s move to a new building in 1864. Mear’s gift was set aside for use of the lodge’s Tyler until at least the early 1900s. So, although the early history of this intriguing and fashionable chair still needs to be uncovered, it eventually added a touch of history and tradition to a Masonic lodge room. If you have any ideas about this chair, let us know in the comments section below.