Now on view: Alice Hendee in “Americans, Do Your Bit: World War I in Posters” 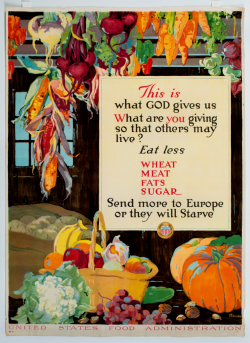 During World War I when the U. S. government sought to persuade citizens to help the war effort, it turned to a group of volunteer artists for help. These artists deployed their enthusiasm and skill to help sell the government’s messages in poster form. Before, during and after America’s twenty-month participation in World War I—from April 1917 through November 1918—the government and private organizations printed more than twenty million posters to encourage citizens to donate money, conserve food, and support war-related charitable efforts.  Some of these posters are now on view in “Americans, Do Your Bit:  World War I in Posters.”

In 1917 volunteer artists formed the Division of Pictorial Publicity, a group within the United States Committee on Public Information. At its height the Division numbered 312 artists in its ranks. Most were experienced illustrators who drew pictures for books, magazines, and all kinds of advertisers. These artists turned their talents to promoting war time initiatives. Their main audience was Americans on the home front. The Division created a host of advertisements, including window cards, subway car cards, and 700 poster designs. Their posters hung in libraries, railway stations, factories, clubs, and schools—citizens could not escape their pressing and persuasive messages.

Throughout the conflict, the United States Food Administration and the National War Garden Commission, encouraged citizens to use food wisely and to produce food at home. The USFA crafted the official policies and mechanisms that allowed America to feed its citizens and soldiers as well as assist the Allies—mainly in Belgium, England, France and Italy—by controlling the supply, distribution and conservation of food. The National War Garden Commission taught new gardeners how to grow vegetables and how to dry and can food for preservation. These and other efforts at home freed up commercially produced food, which could then be sent to soldiers or Allied civilians. To help achieve their aims, organizations produced leaflets, presented demonstrations, sent out speakers, and offered classes. They also printed thousands of eye-catching posters urging Americans to conserve, preserve, and produce.

One design, illustrated at left, was the work of the artist Alice Julia Hendee (1889-1969).  With this image of an attic stocked with colorful fruits and vegetables, she suggested a bountiful fall harvest. The text encouraged viewers to do without in order to help others. The USFA also practiced conservation of poster designs—it presented this same artwork with a different slogan: “Eat less and let us be thankful that we have enough to share with those who fight for freedom.” Signed A. Hendee at the lower right, a note in a list of food-related wartime publications credited the artist of this poster, No. 17. “Fruits and Vegetables,” as Alice Hendee.  A 1917 New York City directory listed Alice Hendee as an artist living on the upper West Side.