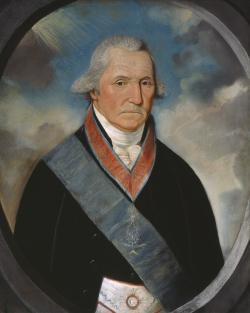 “…the grand object of Masonry is to promote the happiness of the human race.” George Washington, 1793

Elected on February 4, 1789, George Washington (1732-1799) served as the first President of the United States from 1789 to 1797. Washington had been an officer in the Virginia militia during the French and Indian War from 1754 to 1763, a delegate to the First and Second Continental Congresses, and Commander-in-Chief of the Continental Army during the American Revolution from 1775 to 1783. He devoted his professional life to his country. He was born on February 22, 1732, two hundred and ninety years ago today.

Freemasonry played an important role in Washington's private and public life from the time he joined Fredericksburg Lodge No. 4 in Virginia in 1752. In 1788, Alexandria Lodge No. 22, composed largely of Revolutionary War officers, petitioned the Grand Lodge of Virginia for a charter and asked Washington to be their founding lodge Master. He complied with his brethren’s request and served as Master for nearly twenty months, starting in April 1788.

Inaugurated on April 30, 1789, Washington became the first and only United States President to also serve as Master of his lodge during his term. Although his time as Master ended in December of 1789, Washington continued to support the fraternity. While touring the country, he often met with local Freemasons and took part in special ceremonies, such as the cornerstone-laying ceremony for the U.S. Capitol in 1793. After Washington’s death in 1799, Freemasons throughout the nation participated in processions and ceremonies marking the passing of 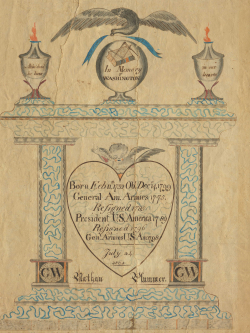 their Masonic brother. The watercolor and ink memorial pictured here (at right) expressed the grief felt by one American upon Washington's death and features, at the center, Masonic symbols underscoring Washington's association with Freemasonry. For over two centuries, Freemasons have taken great pride in Washington's membership in the fraternity.

When you have the chance, we hope you can come visit the Scottish Rite Masonic Museum & Library’s new exhibition, "The Masonic Hall of Fame: Extraordinary Freemasons in American History." This exhibition showcases inspiring American Freemasons and introduces visitors to the history of Freemasonry in the United States. The exhibition will be on view through October of 2024. Throughout the exhibition, visitors will meet extraordinary Masons, like George Washington, who, through their outsized contributions to Freemasonry, government, the arts, and social justice, made a profound impact on their world and ours.

Posted at 09:00 AM in "The Masonic Hall of Fame: Extraordinary Freemasons in American History", Alexandria-Washington Lodge No. 22, George Washington, Posts by Hilary Anderson Stelling | Permalink | Comments (0) 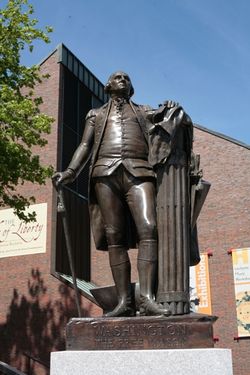 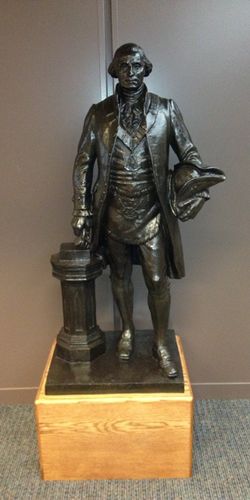