A tintype is a type of photograph that is produced by printing a direct positive of an image onto a thin sheet of metal (tin) coated with a dark enamel or lacquer. This photographic process was first described in a publication by photographer Frederick Scott Archer (1813-1857) in 1851 and is often referred to as the wet collodion process.Tintypes were widely enjoyed from the early 1860s to the late 1890s and were inexpensive and relatively quick and easy to make compared to their predecessor, the daguerreotype. Although tintypes were extremely popular throughout the American Civil War (1861-1865), they were soon surpassed in popularity by albumen carte-de-visites and cabinet cards.

The Scottish Rite Masonic Museum & Library owns a fantastic collection of tintypes, daguerreotypes and ambrotypes featuring Freemasons, fraternal members and their families. Below are two unique tintype objects in our collection. 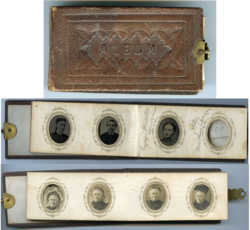 This miniature photo album, referred to as a “gem” album because of the small size of the images, measures just about 3 inches wide by 2 inches long. The photographs themselves are a tiny 3/4 by 1 inch and were created using a unique twelve-lensed camera that could make a dozen “gem” portraits with one exposure.  Gem portraits were commonly stored in special albums with provision for a single portrait per page. Slightly larger versions also existed. Some gems were cut to fit lockets, cufflinks, tiepins, rings and even garter clasps.

This album is part of a larger donation given to the museum by Britta Fleming, the niece of Harold Sprague (1887-1980), the Deputy Grand Master of the Grand Lodge of Massachusetts in 1952, whose Sprague family lineage is intricately tied to Massachusetts and United States history. You can read more about the Sprague family and the collection here.

This collection of tintypes and ambrotypes is a unique example of wet plate process photography. Each of the photographs includes its' own individual frame within the larger frame, which measures a striking 21 ¾ by 38 ¼ inches. The name and age of each of the men is written on the reverse of each photograph and many of the men’s faces have been tinted pink as was commonly found in photographs of this era. At the center of the collection of images is a photograph of a bible with the Masonic square and compasses.

The museum purchased this object in 2001 and it is believed to have originated from a New Hampshire lodge and to have been made some time in the 1860s. The museum cannot verify the information and is currently researching the legible names and ages to find out where exactly the portraits were made.