"Mister Mason was a Mason and a good one too" 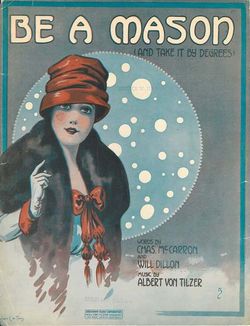 It's fair to say that Freemasonry has been having a bit of a pop culture moment during the past few years. The most recent example, of course, is Dan Brown's latest novel, The Lost Symbol.

But Freemasonry's appearance in popular culture is nothing new. Pictured here is sheet music for the song Be a Mason (And Take It By Degrees) which was published in 1916 (and whose first line is the title of this post). The music is by Albert von Tilzer, who was a well-known Tin Pan Alley composer. You might know him as the man who wrote Take Me Out to the Ballgame.

The song Be A Mason draws on people's familiarity with Freemasonry and puts a funny, even slightly risque, twist on it. Despite the title, the song isn't actually about trying to convince someone to become a Mason or even reminding someone that he should act more brotherly or fraternal.

Instead, the song plays on the listener's familiarity with the existence of the three "degrees" of Freemasonry: the Entered Apprentice, Fellowcraft, and Master Mason rituals that every candidate participates in when joining his local lodge. But, in fact, the song has nothing to do with joining a local lodge. Instead, it's a playful song about seduction, offering humorous advice on how a young man ought to move slowly, in steps, as he woos a woman:

Be a Mason, take it by degrees
Be a Mason, and you'll be sure to please
A little bit now, a little bit then
When you want some more, come back again...

If you're interested in more references to Freemasonry in music, be sure to check out the page put together by Grand Lodge of British Columbia and Yukon. You'll find references from Irving Berlin to Public Enemy.