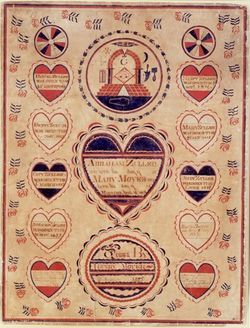 Pictured here is the handpainted family record, or fraktur, of the Zuller family, probably from Minden, New York. In the central heart image, we can see that Abraham Zuller married Mary Moyer (1787?-1850) on April 11, 1808.

Above this heart is a circle containing many Masonic symbols laid out in a familiar pattern.  Among these symbols are the letter "G", which is interpreted within Freemasonry as a reference to the Grand/Great Architect of the Universe [i.e. God] or Geometry.  The arch without a key stone is not only a Masonic symbol, it is specifically a symbol of Royal Arch Masons As depicted here, the dislodged key stone allows the light from the all-seeing eye to shine through.  Other Masonic symbols depicted here within the circle are a coffin, a trowel, and mosaic flooring.  With the inclusion of of Masonic symbols on this fraktur, leads us to speculate that it is likely that Abraham Zuller had Masonic ties.

Surrounding these shapes are smaller hearts with the name of each child born to the Zuller family between 1808 and 1827.  The children include:  Daniel, Betsy, Caty, Abraham, Nancy, Mary, and John.  These hearts, like everything on this fraktur, were handpainted by the artist.  Later, as other children were born, hearts were written on in ink to give children's birth dates.  These include  Henry Zuller, born in 1827.  Other small hearts give the death dates of children.  Nancy Zuller died or "departed this earth" and was buried in 1829.

Henry S. Moyer (1785-1860), the artist who created this fraktur in 1825, was of German descent and lived in Minden, New York.  Moyer's style is considered as artistically as following William Murray, or "in the school of" William Murray. As with Murray's frakturs, the Zuller family fraktur is decorated with watercolor and ink on paper.