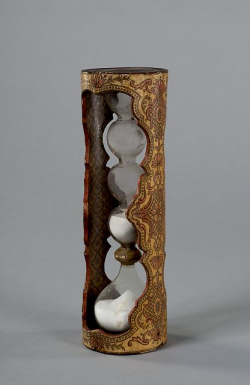 As the remaining hours of 2022 run down, let’s investigate this unusual hourglass in the collection of the Scottish Rite Masonic Museum & Library. Called clepsammia, meaning thief of sand, sand hourglasses are an early method of keeping time. Devices using a fixed amount of sand to measure time were likely first developed in the 1300s, but the need for contained, reliable, and stable timekeeping on ships to aid with navigation helped popularize clepsammia during the Age of Sail (roughly 1650-1850).

Before the invention of the modern clock, hourglasses were used in churches to time sermons, in government offices to time speeches, and in factories to time work shifts. These useful items came in many types, materials, and sizes. A common form of hourglass was intended to measure one hour and was constructed of two glass bulbs, often set in a frame, that were joined with wax and cord.

Another kind of hourglass, used to mark the quarter hour, featured four horizontally-oriented glass bulbs. Each bulb contained either 15-, 30-, 45-, or 60-minutes’ worth of sand. As each ran out, the user could track quarter hours. The vertically-oriented hourglass held by the museum is an unusual form. The sand flows through two glass bulbs - one shaped into four equal chambers and another larger bulb. There seem to be only a few existing examples of this type of hourglass. One is in the collection at the Louvre.

The museum’s clepsammia was crafted in Italy, around 1700. The “sand” is actually powdered stone contained within the glass bulbs, fixed within a wooden frame covered with decorated paper. Compared to beach sand, which has angular edges, powdered stone flows smoothly through the apertures between bulbs. In one direction, the material moves from the largest bulb down, filling first one bulb, then the next in fifteen-minute intervals. When flipped over, the sand empties from each bulb, again in fifteen-minute intervals. This hourglass stands ten inches tall and, at over three hundred years old, is in good condition for its age.

This clepsammia is part of a collection of clocks, watches, tools, and books donated by Ruth Michael of York, Pennsylvania. Her gift of more than 140 items from the collection that she and her husband, Willis R. Michael, assembled over many years forms the core of the museum’s horological holdings. If you’d like to learn more about timepieces in the museum’s collection, you can see more examples in this Flickr album. You can also see this hourglass in action in the video below.