New to the Collection: Elisha J. Cleveland’s Past Master’s Jewel 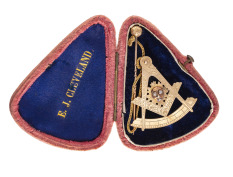 In December of 1859, twelve men applied to the Grand Lodge of Massachusetts for permission to form a new Masonic Lodge, called Hammett Lodge, in East Boston. Members of this group selected Elisha James Cleveland (1821-1866) to be the presiding officer—or Master—of their inchoate lodge. After the Grand Lodge of Massachusetts granted Hammett Lodge a charter in 1860, Elisha Cleveland served as Master. Members and guests attended Hammett Lodge’s dedication and officer installation ceremony early in 1861. Attendees and officers marked the event with speeches and refreshments.

In choosing Elisha Cleveland as their leader, members of the new lodge looked to someone with immediate experience as Master of a lodge. Cleveland had first become a Freemason at Mount Tabor Lodge, in East Boston, in 1851 and served as Master in 1858 and 1859. Around this time, he earned his living as a blacksmith or as a shipsmith in Boston. The brethren of Mount Tabor Lodge thanked Cleveland for his service as Master with a handsome Past Master’s jewel. Cleveland soon received another gold Past Master’s jewel (at left) with an inscription noting that it was given “by his friends, E. Boston, Apr. 6, 1860.” Cleveland was elected Master of Hammett Lodge before it received its charter and held the office through at least part of 1861. Though the inscription is not specific, this jewel likely commemorated Cleveland’s leadership of Hammett Lodge from its start.

After he received this jewel, Cleveland visited a photographer’s studio a few blocks from his home in East Boston. There he had his portrait (at left) taken by a self-described “photographist,” William R. Hawkes. In dressing for his appointment at the studio, Cleveland wore his street clothes—a jacket, vest, neckcloth, and shirt—with the Past Master’s jewel he received in 1860 pinned at the center. This photograph, in a small carte-de-visite format, is an intriguing document of how Cleveland used the jewel and suggests the pride he may have felt in wearing it. 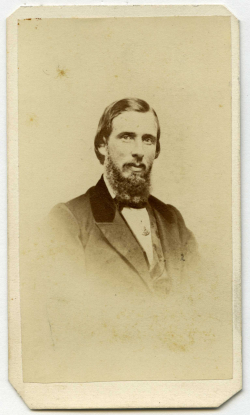 Cleveland died suddenly, of a stroke, in 1866. His obituary noted that he was “much beloved by the masonic fraternity.” Many years later, his widow Mary Ann Cleveland (1824-1883) bequeathed “the Past Master jewels belonging to my late beloved husband” to her son-in-law, Charles Leeds. Both of Cleveland’s Past Master’s jewels, and other Masonic items that descended in his family, are part of a recent generous gift to Scottish Rite Masonic Museum & Library.