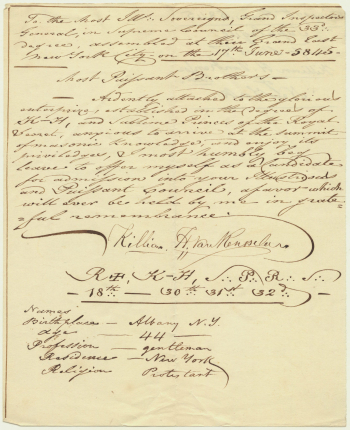 "I most humbly beg leave to offer myself as a candidate for admission into your Illustrious and Puissant Council..." reads this petition addressed to the Supreme Council, 33°, Northern Masonic Jurisdiction, and signed by Killian Henry Van Rensselaer (1800-1881), a 44-year-old Mason from New York, in 1845. This petition was the first step toward Van Rensselaer becoming an Active Member of the Northern Masonic Jurisdiction’s Supreme Council. In less than twenty years, Van Rensselaer would become its sixth Sovereign Grand Commander, serving from 1861-67. The process by which Van Rensselaer received the 33rd degree is very different from how it works today. 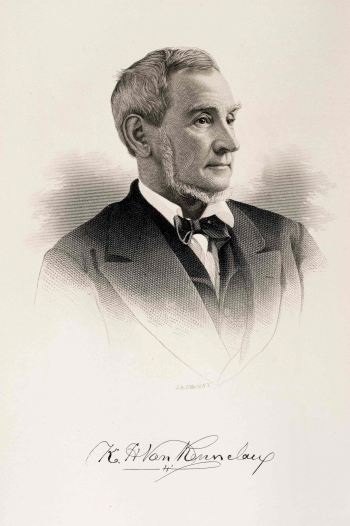 Van Rensselaer’s petition documents the activities of the Supreme Council at the time. Viewed in a broader context, this slip of paper shows the work of John James Joseph Gourgas (1777-1865), the NMJ’s Sovereign Grand Commander from 1832 through 1851, and helps tell the story of the rebirth of the NMJ in the 1840s.

Gourgas, living in New York City, along with Schenectady-based Giles Fonda Yates (1798-1859), had essentially kept the Scottish Rite’s NMJ alive from 1826 through the early 1840s. During this time, a social and political movement, now known as the Anti-Masonic Movement, curtailed much Masonic activity in the Northeast of the United States and brought the Supreme Council’s official activities to a standstill. During these years, Gourgas and Yates were effectively a Supreme Council of two people, preserving the organization’s records and corresponding with one another about the plight of American Freemasonry from the late 1820s through the early 1840s. When the social climate changed and members began to rebuild Scottish Rite Freemasonry in the early 1840s, Gourgas and Yates sought to find brothers, like Van Rensselaer, who could help revive the Council, starting in 1844. Van Rensselaer’s petition is part of that story. With the exception of Van Rensselaer’s signature, the petition is entirely in the handwriting of John James Joseph Gourgas (1777-1865). Gourgas wrote out this petition—Van Rensselaer needed only to sign it.

Handwritten petition for Killian H. Van Rensselaer, 1845. Gift of the Supreme Council of the Northern Masonic Jurisdiction of the Scottish Rite, SC 300.002.

This article was originally published in the Summer 2022 issue of The Northern Light.